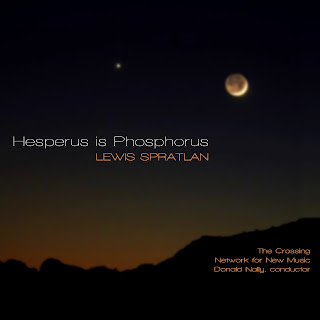 The Ancient Greeks originally thought that the morning star (Phosphorus) and the evening star (Hesperus) were two different entities. The Babylonians apparently knew they were one and the same. At some point the Greeks confirmed that the Babylonians were correct. They both are actually Venus, which we know to be the case these days.

The discovery of the sameness in difference has a sort of human enlightenment dimension that composer Lewis Spratlan has turned into a major choral-chamber ensemble work with texts from such diverse sources as Adrienne Rich, Richard Feynman and the Magnificat.

The work is long and ambitious, lasting nearly 70 minutes. It conjoins the chamber Network for New Music Ensemble under Jan Krzywicki with the choral group The Crossing, conducted by Donald Nally. Vespers Cantata: Hesperus is Phosphorus (Innova 894) enables us to hear the full work in all its sonic liveliness.

A summary of the piece does not come easily. It is a sprawling, dramatically vivid cantata that comes to terms with belief and reality, cosmic appearance and human interpretation, spirituality and change. The music is modern with tonality predominate, but it does not fit comfortably into some categorical niche. It certainly partakes of choral tradition but within Spratlan's own particular vision.

The performance leaves nothing to be desired. It is all one might hope for in a first recording, sympathetic and dynamic. Spratlan shows us inspired form, craftsmanship and his own brand of expressive brilliance.

This is one of those contemporary works that may well find its way into the repertoire. It deserves a place. Hear it and decide for yourself. Bravo!