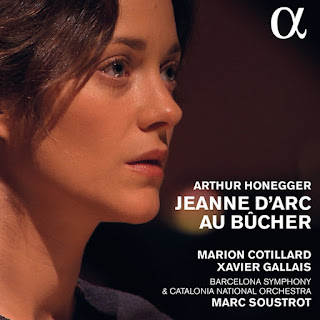 Arthur Honegger, 20th-Century master modernist, seems to get less attention out there in the recent present than he did earlier on. Sure, some works still form a cornerstone of the repertoire but much else in his pretty vast output has been subject to benign neglect, relatively speaking. Often enough the vocal works don't get the attention they deserve, mostly.

Jeanne d'Arc au Bucher (Alpha 709) is a good example. I know there have been a number of previous recordings, not many of late, and in fact I have never heard the work up until now. The recording at hand offers a very respectable, even quite good performance. Marc Soustrat conducts the Barcelona Symphony & Catalona National Orchestra with various amassed choirs and Marion Cotillard & Xavier Gallais as the principal soloists. The libretto was written by Paul Claudel. It received its first performance in 1938 in concert version, the staged version would have to wait until 1942.

The prologue was written later on, in 1944. It is followed by eleven scenes. The present recording takes up 75 minutes. There are some dialog segments, some quasi-sprechstimme with orchestra and choral background, necessary for the narrative but sometimes less interesting as music. The whole is vintage Honegger, moody and dramatic. It is not rabidly modernistic, but extends a tonality outwards in Honegger's brilliant way. It took me a number of listens to get into the music but I eventually did.

It may not be the end-all of Honegger vocal works. There are others of course, some really seminal. Jeanne d'Arc may not be Honegger at a masterpiece level but it is very effective, even haunting at times. Soustrat, the Barcelona orchestra, the choral forces and the soloists capture the moodiness of the work quite well. There may be better versions from the old days but I have not heard them.

Anyone who reveres Honegger will find this release essential. I for one am glad it exists. If you are a full-bore 20th century classicist you will want this one.