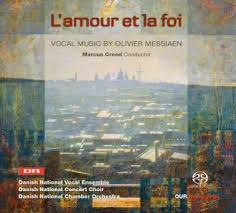 Olivier Messiaen (1908-1992) wrote so much worthwhile music in his lifetime that most, if not all of us are still catching up. The early choral music was for me an unknown quantity until now, until this spirited performance of three real gems has come my way. The Danish National Vocal Ensemble, the Danish National Concert Choir and the Danish National Chamber Orchestra gives us L'amour et la foi (OUR Recordings 6.220612). Marcus Creed conducts.

The three works were completed in 1937, 1943 and 1948. This was a period of great rhythmic vitality for Olivier, a period where his originality shines forth brightly for the first time, a period where his own version of tonality was spiced with modernisms of an advanced harmonic vision, the period of the "Turangalila Symphony." "Trois petites liturgies de la Presence devine" the brief "O sacrum convivium!" and "Cinq Rechants" have all the markings of the masterful early incarnation of Messiaen, including piano (Marianna Shirlinyan), ondes Martinot (Thomas Bloch) and a lively part for chamber orchestra. All that for the "Trois petit liturges." The other two works are a capella, "Cinq Rechants" for a large group of 72 voices.

The choral parts, then, are much the focus of the music. The Danish National vocal groups are most certainly attuned to the spirit of the scores, giving us the etherial beauty without fail. The orchestra and soloists too, are exemplary. Marcus Creed knows what he is after and the disk shines luminously thanks to his vision and the talent of the performers.

"Le Petit" is a neglected masterpiece of the period but the two other works have much magic as well.

You may have heard these works elsewhere but they sound so well here that you may forget the other versions. All Messiaen lovers will be transported. If you don't know his early music that well, not to worry. This is a great starting point.

The album gives me joy. I imagine it will do the same for you.

Posted by Grego Applegate Edwards at 4:58 AM