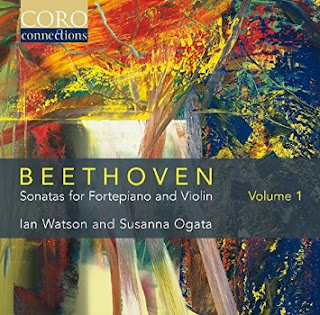 The sphere of original instrument recordings in classical music continues to expand. I first became aware of such things sometime in the mid-to-later '70s, primarily in the large ensemble realm. It was a revelation. Then solo piano recordings began appearing. I may have missed others at that time, but in the realm of chamber music for mixed instrumentation there seems to have been a special burgeoning in the last several decades. We have been treated to some very fine period-style recordings of Beethoven chamber music lately for example and I have covered many here. Today another excellent one, Beethoven's Sonatas for Fortepiano and Violin, Volume One (CORO 6138), as played by Ian Watson, piano and Susanna Ogata, violin.

The fortepiano used on the CD is contemporary with Beethoven's day and sounds rather glorious. The violin is period as well. With the sonorities and balance there as Beethoven originally conceived of them, we hear something different. Of course the pianoforte of Beethoven's time was more subdued, the volume lower and the registers less inclined to "ring out." The violin subsequently is more prominent in the mix. The result is revelatory, the piano passagework less dominant yet of course luminously present as realized with the sonarities involved.

Volume One covers the Sonata No. 4 and Sonata No. 9 "Kreutzer." As the artists state in the liners, the aim is "to recreate the white-hot emotions and passion that these sonatas must have generated in their first performances."

That certainly seems to be the case, to my ears. Watson and Ogata give us warm, empassioned readings filled with zest and brio, but given the original instrumentation they do that without the sort of clangorousness one gets with the modern piano especially.

These are beautifully alive readings, lacking nothing in virtuoso presence but sounding more articulated and transparent. The original instrument balance is such that you hear each part with a new clarity. I've noticed such things too with the original instrument recordings of Beethoven's Cello Sonatas and Piano Trios (covered here).

And original instruments or not, Watson and Ogata give us excellent performances. Add the pristine sound as Beethoven must have conceived it and you have something really fine indeed. I look forward to volume two!

Meanwhile this is a highly recommended offering. It brings me joy!