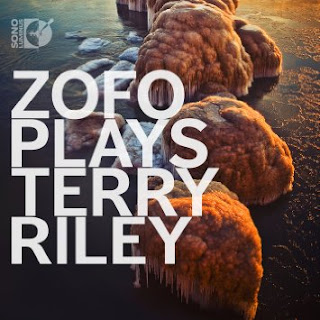 Terry Riley catapulted into new music fame with the release of the first recording of his "In C" back in the later '60s. It is regarded today as a landmark in the development of so-called minimalism. He went on to other works and other recordings that continued his explorations into the mesmeric mantras of repetition. But there is another side to the composer, in his later years especially, that goes beyond that style and into a considered tonality generally more through-composed, less cyclical, more open and exploratory yet original and recognizably Riley-like.

The very capable, very expressively pianistic and adventuresome four-hand piano duo ZOFO (Eva-Maria Zimmermann and Keisuke Nakagoshi) give us nine such works on their recent ZOFO Plays Terry Riley (Sono Luminus 92189), which as with many Sono Luminus releases comes as a standard two-channel CD and a blueray DVD 5:1 mix as a part of the release package.

The only composition I am familiar with is "G Song," which was recorded some years ago in a chamber version. It sounds quite well for 4-handed piano. The other eight pieces were previously unfamiliar to me.

"Praying Mantis Rag" was specially commissioned by ZOFO. The entire program presents a very different side of Riley, the music well-suited for the four-hand sensibilities of ZOFO, fascinating pieces that gives us Riley the post-cosmopolitan, world-directed classicist.

It is a triumph for ZOFO and a great program in itself. This is a different Terry Riley than we may expect but nevertheless excellent in all senses. Listen!