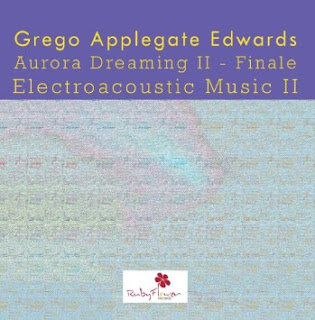 Greetings to anyone out there reading this. My third and fourth albums are now out, so I thought it might be timely to talk about them a little bit on here, since they are not going to be on the radar I suspect of any of the media channels out there as yet. Plus the objective of course is to attract listeners. So once again I am putting together a little fake interview of self-with-self.

Self: So you persist in releasing music CDs in spite of the fact that the market is glutted with indie product? Do you think you are a big deal or something?

Grego: No. Not a big deal. Far from it. In fact I am broke, little known and, at this point, my partner and I are living a life of poverty with the road ahead very unclear financially. I am the opposite of a big deal. But after a lifetime of considering music as a composer, player, listener and of course as a writer I do think I have something to contribute. So we have the two-volume electro-acoustic work just now out, Aurora Dreaming, which is available on Ruby Flower Records as Aurora Dreaming I and Aurora Dreaming II: Finale. The idea or root story behind it all is that the mythical Aurora creates the Northern Lights nightly by her special dreaming activities. Aurora Dreaming represents a full night of all that.

Self: What made you come up with Aurora Dreaming?

Grego: Since my high school days I have been interested in so-called electronic music. I did a good deal of fiddling around with tape recorders when young and it culminated in taking in a lab course at the Columbia-Princeton Electronic Music Center in 1972. Synthesizers were pretty new then. Of course there was by that time a rather sizable volume of works to be heard on record, by the French school of musique concrete with Pierre Schaeffer and his school, the "Americans" Ussachevsky, Babbit, Mimaroglu, then John Cage and his associates, and the Darmstadt folks, Stockhausen most especially, still further the synthesizer-based composers like Rudin, Wuorenin and Subotnik. I listened to and appreciated most all of it, and tried in my own way to get a widely dense and pointillistic scatter of sound. Then later I discovered Reich's early work, Oliveros and the ambiance of Fripp and Eno. By then I had stopped composing for a time. But with the new digital sound modules, synths, digital processing and editing, by the turn of this century, I began getting the elements of a studio together and experimenting with what sounds were possible. That studio is no more for the moment, but the tracks were at a stage where I could process them on PC-based digital editing software and so the later phases of production were done on a comparatively integral and modest set-up.

Self: And of course in the meantime "electronics" had become a mainstay of pop, some rock, and hip hop.

Grego: Yes. The rock element still interested me but "beats" and such I didn't see myself getting into much. I liked the cosmic expanse that some ambient psychedelia offered, and Fripp and Eno's albums had a big appeal for me. Most of all I liked the quasi-orchestral possibilities that the new digital technology offered.

Self: So what does that mean?

Grego: Digital technology allows you to layer and fine tune, to "orchestrate" the sound to a much greater degree than when I was back with some elemental analog means at ages 14 to 18. Plus I am not entirely sure back then that I had a coherent vision of what I was after. If something came out sounding right, I went with it. I tried things and they were either interesting or less so. But there wasn't a lot of reworking or editing. partly because I didn't have access to sophisticated equipment for any length of time, plus I was not thinking as conceptually as I might have. Now I can go through composing stages in much greater detail. Plus after years of listening to all kinds of music, I am more focused in what I want to do. So essentially the entire Aurora sequence developed over several years of time. I built up more or less complex layers of sound using synthesizers, very electric guitars, bass, percussion, drums, natural sounds, voice and a tiny bit of sampled things, the latter exclusively on the first couple of movements. Once I had obtained a mix of the various elements, and that in itself was quite involved with many attempts...anyway once I was happy with the various balances I subjected the master mixes to further modifications. Ultimately I was after a highly ambient series of gradually changing sound plateauxs, with sections representing Aurora drifting off to sleep, her first dreams of the night, and then on to some very deep (and sonically dense) late night dreams, climaxing just before the dawn, when Venus (the Morning Star) appears and then the creeping sleep-quiet comes on--in response to the first rays of dawn. Without the digital multi-track platform I never would have been able to tune the sound in the ways that I did. I am happy that the result is dynamic and pretty cosmic, and that the textural aspect is quite colorful, I hope.

Self: Well, so maybe folks will find it interesting then?

Grego: I hope so! It's more about slowness than speed, more continuous than rapidly scattered, more harmonic than melodic, blocks of density with varying degrees of note clusters laced with noise, not static but except in a few sections not conventionally pulsating. The two volumes taken together represent one evening of Aurora and her sky painting, her slumbers and heaven-embracing dreams.

Self: So what kind of music is it?

Grego: I don't know except that it has something to do with the electricity of rock, sometimes a bit of the openness of improv, but in all that a sort of continuity of electro-acoustic poetics. There is most definitely some of the immediacy of the highly electric psychedelic ambiance such as I've been exposed to from the days of Hendrix on, yet more long-formed and so having some relation to new-music classical. As I went through the various stages of building up the music I was never exactly sure until towards the last stages where precisely it was going, though there was a general vision. I did not set out to follow any special style-set so much as I went with my intuitions building up, tearing down, rebuilding, transforming until I began to see where it was all headed.

Self: Where do you see this fitting in as far as your future music is concerned?

Grego: I think it is a pause point for me. Unless there is an opportunity to create thick washes of live instruments playing in real time I think I've taken this sound as far as I would like it to go. Upcoming releases are going to be more pulsating and directional than this. We'll see after I get the rest of this music out what sort of live music possibilities develop. Meanwhile I hope people will go the little extra and get this set, the second volume which is priced at $9 to encourage more folks to take a chance. I hope there will be lots of listeners and that they open themselves up to where the music can take them. There is a real journey there sonically. This is not designed to make me money, but to give people an experience.

Self: OK, then. Here is a link to the Amazon site and Volume 2's ordering info. From there it is easy enough to call up the first volume info as well.

Copy and paste this url into your browser: http://www.amazon.com/Aurora-Dreaming-Grego-Applegate-Edwards/dp/B011SV466S/ref=sr_1_1?ie=UTF8&qid=1438107712&sr=8-1&keywords=grego+applegate+Edwards

Posted by Grego Applegate Edwards at 11:57 AM