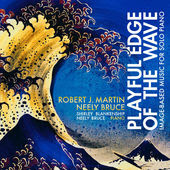 An unusual 2-CD compendium of solo piano music is up for review today. Playful Edge of the the Wave: Imaged Based Music for Solo Piano (Ravello 7909) features four suites of modernity-saturated piano miniatures, as performed nicely by Shirley Blankenship and Neely Bruce.

The centerpiece of the set, by Robert J. Martin, is the title work "100 Views of Mt. Fuji: 100 Pieces in 100 minutes--Homage to Hokusai." Each of the very brief works is based on a collection of classic Hokusai woodcuts called "One Hundred Views of Mt. Fuiji." Each has a visual aspect of the woodcuts in mind . For example, there is "Breeze Dancing Across Water" from the "Wind" series. This work along with the others has a matter-of-factness, a primal immediacy, like "Chopsticks" in its there-ness only of course much more sophisticated and modernistic.

Complementing the main work are three others: Martin's "Stone & Feather," studies on timbre and space conveying images of lightness and heaviness. Then there are "Improvisations" and "Homage to Seb," both by Neely Bruce. The former are a series of 13 free improvisations Neely recorded after a session devoted to Charles Ives' Songs. The improvisatory pre- post- or interludes are each named after phrases in Ives' song texts.

"Homage to Seb" pays respect to Johann Sebastian Bach by liberating examples of the master composer's dissonances from the original compositional contexts, then reordering them arbitrarily and composing chromatic figures around them from notes not a part of the dissonant passages. The result is Bach as high modernist, or rather Neely Bruce in this guise, since the end-result is of course his.

There is no one description that comes to mind of the many short movements that comprise this set, except that a visually oriented approach is the norm, that the music is both sophisticated and primal, and that the music has a visceral immediacy that is in-the-moment and not tied so much to formal, long-form structures.

For all that we get a very refreshing disencumberment from the conscious large-scale and instead get a voluminous series of moment-images, each different from the other like the framing of seen images or aspects of them differ one from another.

It is a very adventurous set, unpretentious and direct, but ultimately rather profoundly so.