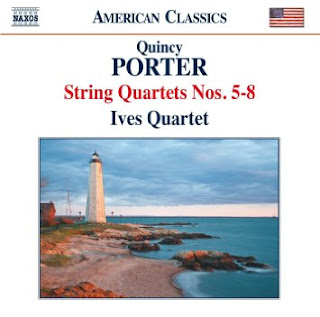 When I think of American composer Quincy Porter (1897-1966) my mind involuntarily associates him with the painter Fairfield Porter (1907-1975). Both had strong connections with New England, both remained within a non-avant framework creatively throughout their lives, Fairfield with realist representation, Quincy with a neo-classic style, both had suffered something of a reputational eclipse by the time they were in late maturity, both had something of a pastoral quality to their work, and both perhaps are re-gaining more recognition now than in the immediate period following their deaths.

Quincy studied with Horatio Parker at Yale, who also taught Charles Ives years before. He then went on to learn from Vincent d'Indy in Paris. His music output puts him in with the second generation American contemporaries Harris, Hanson and Sessions, only perhaps much more firmly neo-classical than the others. Yet there is something modern sounding about his music nonetheless.

A recording of his String Quartets Nos. 5-8 (Naxos 8.559781) has been reaching my ears for a few weeks, as played very capably by the Ives Quartet. Apparently there was an earlier volume that came out some time ago that I missed, but the works contained in this volume, covering the period of 1935 through 1950, gives us a generous and enjoyable portion of his work in the medium.

The four quartets represented in this volume have a very well-crafted, mostly sunny dispositioned balance to them. They show off Porter's intimate familiarity with the string medium (he was a professional string player for a time) and his talent for creative, rhythmically vital and melodically sophisticated music in this realm.

All four quartets are masterful examples of Porter at his best. They are not gushingly romantic nor are they wildly modernist, but they have a sort of "American Gothic" charm without having recourse to folksong structures or anything much in the way of referential Americanisms. The harmonic movement throughout the works is often more 20th century than not, though unambiguously tonal, which gives the music a kind of crisp edge to it, a contemporary quality.

From the vantage point of today they hold up remarkably well, sounding neither archaic nor anachronistic, but rather very much a product of their time period. He used classical forms but never resorted to an imitation of the old masters, at least not here. The Ives Quartet does a bang-up job and the music has an energized freshness that many will gravitate towards, I would think. Highly recommended.