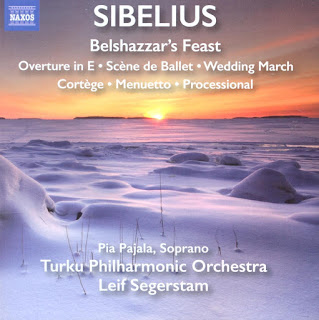 Ah, Jean Sibelius (1865-1957). His music is magic. Where would his music have gone had he not received at a fairly young age a lifetime pension from the Finnish government to compose, with seemingly few strings attached? Would he have kept to his sort of post-impressionist, post-romantic style, as he did over his lifetime? Who knows. I do not.

It is difficult to imagine Sibelius being something other than who he was. I will admit that it took me some time to appreciate how singular and wonderful that is, especially in my younger years when I was expecting all modern composers to be...overtly modern.

I listened, appreciated, but it wasn't until I took a flight from Chicago to New York years ago and they had his 5th Symphony playing repeatedly over the classical music channel on the earphones. A revelation when combined with a striking view of the sky and clouds...

So now I can say that Sibelius is essential, to me at least. His symphonies, his Violin Concerto, his orchestral work, the "Lemminkäinen Suite (Four Legends from the Kalevala)," the major tone poems, all wonderful.

And then there are other less-known miscellaneous works of his. You can hear some of them very respectably performed on the new release Belshazzar's Feast (Naxos 8.573300) by Leif Segerstam and the Turku Philharmonic.

It is a mix of fascinating music created mostly in his younger years. The "Overture in E major" and the "Scene de Ballet," both from 1891, are apparently what were his first efforts, the first two movements for an inaugural symphony that he never completed. They are in some ways more Sibeliusian than his actual "First Symphony," at times, the actual first having more of a Tchaikovskian feel now and again.

The central work on the collection is the title piece, "Belshazzar's Feast" (1906). It is a multi-movement suite of incidental music composed for the play of the same name, written by Sibelius's friend Hjalmar Procope. It has much charm and a goodly amount of the hallmarks of Sibelius at his best.

To complete the program are four other brief pieces written between 1894 and 1938, one-off orchestral works that are perhaps not masterpieces but gratifying to hear for anyone who admires the composer and his ways.

And in that this collection will be cherished by Sibelianites. It is probably not the album to start with if you don't know Sibelius well. For that you should probably begin with the Violin Concerto and/or the Symphonies (three and on). Nonetheless this is a charming set that at the Naxos price is hard to beat.