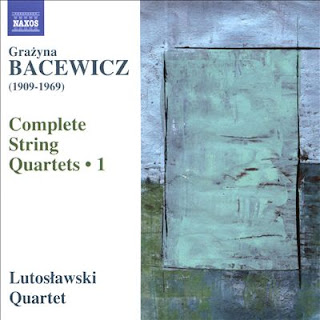 I have discovered to my delight that Grazyna Bacewicz (1909-1969) was more than a merely very interesting Polish modern composer. Her string quartets are brilliant. Happily Naxos sent me their first volume, Complete String Quartets 1 (Naxos 8.572806) as played with care and great understanding by the Lutoslawski Quartet. And a few listens later I come on the blog to express my satisfaction and even amazement with the results. The inaugural CD includes her Quartets 1, 3, 6 and 7, covering the long period from 1939 to 1965.

Each one is a gem, holding a sort of middle ground between Bartok and Ligeti, and doing it so well, so much with her own special integrity. I am almost at a loss for words. "A progressive composer would not agree to repeat even himself," she remarked in 1964, and that is very much true of the quartets. She takes on neo-classicism in the delightful First Quartet and then proceeds to give us a very personal form of expressionism, serialism and beyond in the later works.

All have a special structural integrity, a sense of form that lights up the part writing, gives us motivic originality and a discursive flow that pours out in streams of exceptional illumination.

She does not repeat herself. She follows that maxim so that each quartet occupies its own realm in the most modern and poetic ways. I should qualify that to say that my reactions are based of course on the four quartets included in Volume One, but I can scarce imagine that Volume 2 will be anything but an affirmation when it comes out.

The sound is pristine and well defined. The performances are world-class. And the music is unparalleled. What else need I say? I am stimulated to hear much more of Bacewicz's music as a result of this disk, and of course I await Volume 2 with keen anticipation. I recommend the first volume to connoisseurs of the string quartet and anyone interesting in 20th century chamber music. Do not hesitate!