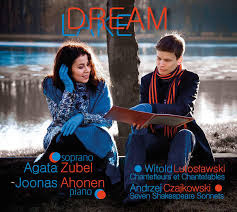 The Polish modernist art song finds beautiful expression on a CD by soprano Agata Zubel and pianist Joonas Ahohen entitled Dream Lake (Accord 216-2). On it we are treated to two song cycles: "Chantefluers et Chantefables" by Witold Lutoslawski (based on poems by Robert Desnos, arranged for soprano and piano by Eugeniusz Knapik) and "Seven Shakespeare Sonnets" by Andrzej Czajkowski.

Robert Desnos submitted his manuscript "Chantefluers et Chantefables (Song-Fables for Good Children)" for publication right before his arrest by the Gestapo in 1944. Lutowslawski selected nine poems out of the 80 in 1990, originally scoring them for soprano and small orchestra. The Knapik arrangement brings the essence of the music to the forefront, and the accompaniment in the hands of Joonas Ahohen has great poetic grace. Aata Zubel is marvelous in her performance, with a unerring sense of pitch, a beautiful, dramatic sense of tone, in line with the very best modern vocal performances I have heard. The melodic poignancy of the music is given a near perfect realization.

Similarly Andrjez Czajkowski and his "Seven Shakespeare Sonnets" fare especially well with the duo's renditions. Czajkowski (known in the West at the time as Tchaikovsky), had great renown as a concert pianist beginning in 1955, ultimately leaving his native Poland for good. He was torn between his role as concert pianist and his inner need to compose. The "Seven Sonnets" were written in 1967. Like the Lutoslawski cycle the music is firmly modernistic and deeply singular. And as with the first cycle Ms. Zubel performs her parts with tremendous musicality and expressivity. Ahonen gives us atmospheric readings that meld with the exceptional soprano sonics for an unforgettable result.

The combination of late high-modernist masterwork lieder and superb performance make this a recording of special merit. Aata Zobel is a true phenomenon and Joonas Ahohen her near-perfect foil. Strongly recommended!