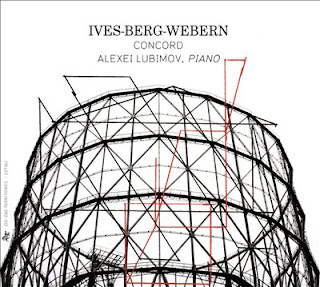 When we have the benefit of hindsite, we can see relationships between very different schools of composition, and of course still experience the uniqueness of each work. This comes nicely to the forefront with Russian pianist Alexei Lubimov and his worthy release Ives-Berg-Webern: Concord (Zig-Zag Territories 362).

The pioneering American Charles Ives and two of the "Second Viennese School" composers, Berg and Webern, both contrived a world of modernity without knowledge of one another, as two isolated camps. Ives created the fantastically ambitious "Piano Sonata No. 2, Concord, Mass., 1840-60" during the period 1911-15; Berg wrote his "Piano Sonata Op. 1" in 1908, a few years after embarking on an important period of study with Schoenberg; Webern wrote his only work for solo piano "Piano Variations, Op. 27" somewhat later, in 1935-36. They all converge with a break from romanticism per se and a highly developed choice of notes beyond conventional harmony. Yet the Viennese composers and Ives came to it all independently.

By the time Webern wrote his work his development of an abstracted, disjointed style was complete. Webern's influence was paramount of course in the high modernist world of serialism. But as most everyone knows Ives and Berg were highly influential as well in the century that followed, though for a time the influence of Webern triumphed as the father of high modernism in the period of, say 1950 through 1970. All three composers have foundational status as we look back today.

Alexei Lubimov has by virtue of his Russian background the ability to see all three works from a perspective more removed from nationalist concerns and so is able to look at the music freshly. Hearing his readings of the works all together in this release allows us to savor the subtle and sometimes dramatic differences and feel the convergences. The Berg and the Ives seem closer in the end to each other than to the Webern. There is a rubato openness in each of the works and an advanced tonal broadening. Yet seen from another perspective, Ives contrasts dramatically from Webern and Berg in his intertwining of and reworking of hymns, marches and the "fate motive" from Beethoven's Fifth. In that he was as much a father of postmodernism as of modernism.

All that is what makes the juxtiposition so interesting. If you sometimes hear a Scriabin influence in Berg and Ives, that is another aspect of convergence that no doubt was all about something being "in the air." Lubimov helps us to hear that element perhaps a little more clearly because of his roots, one might suggest.

In the end though it is Alexei Lubimov's supreme interpretive sensitivities that make all three works sing with lucidity, to speak to us today not in some shocking sense, but as music that we can understand readily, get inside of and respond to. It is music we now have a good deal of kinship with, after a century of exposure to the broadening modernity that lives in the present today but percolates back to these seminal piano works.

Ives, Berg and Webern get in Lubimov's readings the very expressive treatment they deserve but also a very coherent sense of flow. For all those reasons I do not hesitate to recommend this CD to you, whether you are very familiar with all three works or come to them with new ears. Well done, Maestro Lubimov!