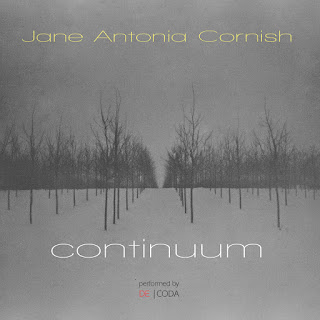 The world of emerging new music composers continues to grow. There are now a good number who espouse a new classical modernism built of post-modern, sometimes radical tonal elements that point to early music and modal forms not strictly minimalist nor quite beyond it altogether, in that there is more in the way of repetition, but usually more in the nature of an ostinato. Arvo Part has been a model composer in the past decades with an influence that has freed composers from restraints of modernist practice or neo-classicism per se. All of this exists today in a pluralist world that includes extensions of modernism and both neo-classic and neo-romantic camps.

Jane Antonia Cornish, British-born New York resident, most certainly qualifies as one of the post-modernists, a rather important one, judging from her recent release of chamber works entitled Continuum (Innova 923). She is known for her lushly atmospheric film soundtracks. This is her second release of chamber works, following upon the heels of the acclaimed volume Duende (see my post on that release from May 7, 2014 on these blog pages).

The Carnegie Hall affiliated group Decoda does an excellent job performing the seven works presented on Continuum. "Nocturne I-III," "Continuum I & II," "Portrait" and "Tides" make up the program. Strings are at the forefront. The three "Nocturnes" feature a cello quartet, the two "Continuums" and "Tides" are scored for two violins, four cellos and bass guitar, "Portrait" is for solo cello.

Much of the music is built upon repeating chord progressions with variations and counter figures, a little reminiscent of the baroque variations built on the theme of "La Folia," yet quite different in sound and result. There are often enough broken-chord string arpeggiations, and generally a full, warm sound both atmospheric and lyrical. "Portrait" concentrates effectively on arpeggiations. "Tides" contrasts open-fifth and more complex oscillations in the violins with contrasting cello-bass guitar chord clusters to musically model the idea of shifting wave cycles. The music builds into what becomes climactic chordal swells that more adherently alternate between violins and cello-bass to create a sort of natural steady state, which then transforms into an ever-more gentle cello chordal sounding.

All told Jane Antonia Cornish gives us some very evocative and lyrical music that is neither quite linear nor cyclical, but instead utilizes the two together to create memorably poignant sound structures. She deserves your ears, certainly, on this one. Both Continuum and the earlier Duende show us a composer of great promise, with a haunting spatiality, and a primal yet complex sense of sound. Definitely recommended!