Michael Byron, In the Village of Hope 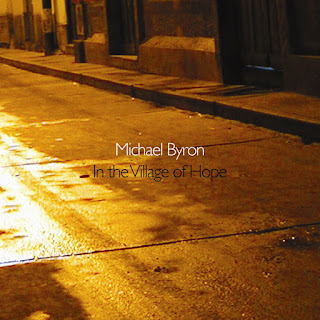 Michael Byron composes in a radical tonality realm, producing music that has a sort of natural, processual feel to it. Several of his albums were favorably reviewed on this blog in 2014. Type his name in the search box for those. Today we have another, In the Village of Hope (Cold Blue 0043), an EP containing the title track, a single-movement work for solo harp lasting some twenty-odd minutes.

Tasha Smith Godinez performs the work with distinction. There are dual contrapuntal parts that continue throughout, in diatonic and sometimes pentatonic modes. The rhythmic, nature-inspired complexity of the two parts working together may call for two separate harp tracks, I am not entirely sure, but it makes no difference to the music, which is organic and endlessly fascinating. I just heard in from label head Jim Fox. The harp part is played with two hands in real time. That is difficult and some feat!

The two-part complexities are drawn towards cascading, infinitely variable rhythmic co-incidences that work together like the patter of rain on two different roofs. There is no overt synchronization; the diatonic-pentatonic patterns of notes play against each other in an infinitely variable way, modulating to a new key center now and again, but consistently irregular in ways the listener follows with a continual search for geometric ratios but finding them too complex to assimilate into a simple gestalt. And that in great part is where lies the charm and fascination for the listener, if not also for the sheer sensuality of the asymmetric pitch co-incidences.

The brevity of the work leaves you with just enough to convey an acoustic impression and a mood of tranquility and hopefulness. The sound of the harp has those sorts of connotations, at least for me, and the music does much to reinforce and underscore a peaceful yet dynamic experience.

In the end Michael Byron gives us a very satisfying work, a living, breathing cornucopia, a significant brush with music-as-nature, beyond the usual human restructuring. It is a delightful listen that I gain something from each time I hear it. If you are open to a new adventure in sound, this will doubtless provide you with much pleasure as well.