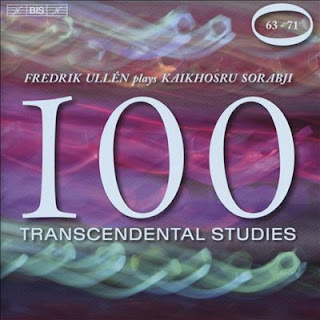 Of all the 20th century composers for the piano, Kaikhosru Shapurji Sorabji (1892-1988) is no doubt the most Promethean. The liners to the CD at hand today make mention of some 90 hours of solo piano music he wrote in the 65-year period beginning in 1917. His "Symphonic Variations" alone requires nine hours for performance. The "100 Transcendental Studies" in comparison requires seven hours to perform in its complete version. His music is sprawling and quite demanding, like the Charles Ives of the "Concord Sonata" only more prolonged and intense, or a mad-scientist expansion and extension of Liszt at his most difficult. The music has a rubato, extraordinarily expressive approach, very chromatic and at times at the edge of tonality.

Playing Sorabji properly requires a special virtuosity and an interpretive commitment few pianists are willing or able to make. Fredrik Ullen most certainly is singular on both fronts, as one hears readily and astonishingly in his ongoing recording of all 100 Transcendental Studies, the latest volume covering Nos. 63-71 (BIS 1851).

All 100 studies were composed between 1940 and 1944. The later pieces especially are sometimes far longer than a typical etude, with eight or nine parts sounding simultaneously at times, with dense and intense passagework going forward at great lengths, exhaustingly.

Ullen responds with a superhuman effort. The music in this volume gives you Sorabji at his most wonderfully eccentric--a post-Scriabin on steroids, with heroic cascades, avant torrents from a never-ending inventive fountainhead.

They are some of the more incredible piano works written, all told, even though we are hearing only nine of the 100. Fredrick Ullen brings out the expressive clout and high passions of the music with a brilliance it is hard to imagine realized by anyone else to this extent.

It is music of an overwhelming power. Even if you know something of Sorabji the composer, this volume will surprise and I think delight you. Newcomers will find this a bracing listen, too. It is some incredible music! Highly recommended!