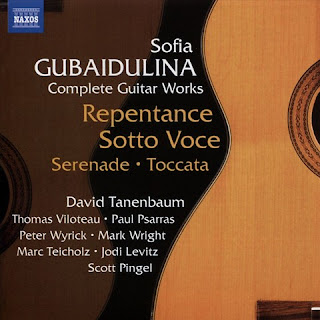 The classical guitar does not dominate the modern classical worlds, compared to the piano or the violin. Those who write for it (but do not specialize in it) tend to do so out of a fascination for the possibilities more so than an expectation of immediate acceptance and widespread performances across the concert stages of the world. Toru Takemitsu and Hans Werner Henze come immediately to my mind as having written some notable chamber works for guitar and other instruments.

There have been others of course, some quite prolific. Then there is contemporary Russian composer Sofia Gubaidulina (b. 1931). Thanks to a new release we can listen to her Complete Guitar Works (Naxos 8.573379). Her output for the instrument is not vast, and can easy fit the length of a CD. Stephen Tannenbaum is the principal guitarist on these works. He realizes the parts carefully and poetically.

There are four works at hand, two rather long, two quite short. They span much of Gubaidulina's career, from 1960 to 2013. The two short works, "Serenade" (1960) and "Toccata" (c. 1969) (the latter in first recording here) are for solo guitar and show the composer in a modern-melodic mood, giving the guitarist advanced melodic-harmonic voicings and showing Sofia's special sense of form. They are little gems.

Both works make use of both conventional and less conventional classical guitar techniques, including pulled strings, the use of slide and such. The aim in both works is to create a sensuous sound world with event-clusters of modernity that take full advantage of the special sonarities of multiple guitars playing off the bowed stringed instruments as contrast and confluence. They show Gubaidulina's deliberate, evocative use of harmonic coincidences and sound colors, guitar ensemble versus solo strings, alone and together, distinctively Gubaidulina-like phrases that work together to create episodic periodicities as only she quite can.

The works create vivid moods as they take advantage of both idiomatic and modern guitar possibilities and the string writing that tends to be one of her stylistic hallmarks.

These are not your typical works for guitar, but they are first-rate Gubaidulina. The performances are very good. After you've listened enough times, the logical but highly original musical mind of Gubaidulina comes through.

Do not expect a super-virtuostic guitar music. It is music that is by no means easy to play well, but nonetheless puts the emphasis squarely on musical sequence and sound color.

All in all it is some rather remarkable music. Recommended for the modernist as well as the classical guitar afficionado who seeks something very unusual and stirring.