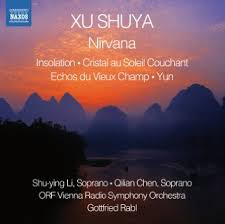 There has been of late a luxurious flowering of contemporary Chinese classical composers who are reaching Western modernist ears. One of the best is Xu Shuya (b. 1961), based on his recent collection of orchestral works in the volume Nirvana (Naxos 8.570617).

Born in north-east China, he graduated from the Shanghai Conservatory of Music in 1983, quickly becoming a faculty member. He then went to Paris, got his masters in composition with distinction from the Ecole Normal de Musique de Paris in 1989, went on the receive the 1992 Premier Prix in composition from the Conservatoire National Superiore de Musique et de Danse de Paris, where he studied with Ivo Malec and participated in Master Classes with Stockhausen, among others. He then attended IRCAM as a doctoral student. Such were his auspicious beginnings.

He has amassed a sizable number of compositions, five of which we hear in the collection at hand, as performed ably and spiritedly by the ORF Vienna Radio Symphony Orchestra under Gottfried Rabl, with Shu-ying Li and Qilian Chen as the soprano soloists. The works presented here cover the years between 1992 and 2014. They show Xu Shuya as a very inspired writer of orchestral music in a late high modernist style. If you listen carefully you will hear at times the influence of Chinese traditional music in his use of space (and in "Yun" a melodic affinity) but generally this is music that embraces the internationalist realm of advanced sound color collages, an architectonic sense of note clusters that often dwell somewhere beyond conventional tonality, and a sort of interplanetary sprawl of avant sound events that retain a distinct identity while still belonging to the advanced school of the avant orchestral approach.

There is a great deal to absorb and appreciate in these works. Xu Shuya has a finely vivid orchestrational and evenamental feel that comes out dramatically. Anyone interested in high modernism and contemporary Chinese composers will gravitate toward this volume. It is well done on all fronts. Careful repeated listens bring you satisfying rewards!