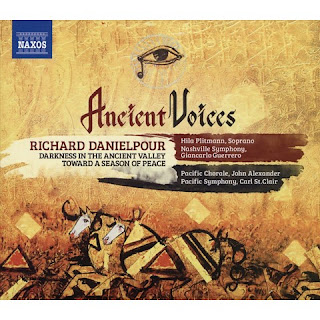 Composer Richard Danielpour comes into prominent focus with two ambitious orchestral and orchestral-choral works on the new 2-CD set Ancient Voices (Naxos 8.578311-12). "Darkness in the Ancient Valley" is a "Symphony in Five Movements" from 2010. It features the Nashville Symphony under Giancarlo Guerrero with Hila Plitmann as the soprano soloist. "Toward A Season of Peace" (2011) is for the Pacific Chorale and the Pacific Symphony, directed by John Alexander and Carl St. Clair, respectively.

Both relate to each other thematically. The "Darkness" Symphony concerns itself with the state of things in Persia in 2010 and the hope for continued reforms there. (Danielpour is of Persian ancestry.) "Toward A Season of Peace" is a heartfelt wish for peace in the Middle East.

Both works are stirring and at times somber, at times impassioned, at times reflective. They do make use of musical elements from the region, but often enough the music is contemporary-tonal in a modern 21st century way.

There is rhythmic vitality, melodic singularity and excellent use of orchestra and choral forces. Danielpour has become a voice unto himself. The music is rousing and effective. If its release happens to come at a delicate time for the diplomacy issues that are under review by some in the USA, it is of no relation to this fine music. And who of us does not wish for peace? I hope very few.

It is with that thought that I recommend this music to you. It is extraordinarily well performed and masterfully scored and conceived.