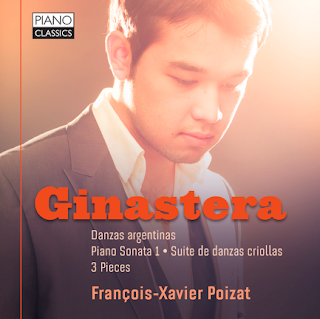 With the incredible development of classical modernity in the 20th century and its continuation-aftermath in the late 20th and early 21st centuries, we have accumulated a formidably vast body of works that we continue to learn more about . . . virtually every day. There are so many composers, so much that remains outside the standard repertoire. A dedicated listener has a wealth of music to draw upon, a significant body of musical riches to explore. A single lifetime is hardly enough to contain and assimilate it.

Argentinian composer Alberto Ginastera (1916-1983) is an excellent example of someone many of us still need to get to know better, unless you are an expert on 20th century Latin-American classical. A very good CD of his piano works is now available, as played with great dash and spirit by Francois-Xavier Poizat. It includes Ginastera's Danzas argentinas, his Piano Sonata 1, etc. (Piano Classics 0087). It is a great place to make the composer's acquaintance, or to become more familiar with him if you already know some of the music.

It shows us a musical original filled with tremendous rhythmic vitality, great melodic charm, and a dazzling pianistic brilliance--all brought out well by Poizat. There are dance-originated works which go beyond typical traditional bodily movement into pure instrumental brightness. The "Danzas argentinas" and the "Suite de danzas criollas" are exciting examples. There are the more purely pianistic realms of the "Piano Sonata 1" and "3 Pieces, op. 6" which retain the rhythmic vitality at times but also branch into a sort of modern lyricism as well.

You can hear the influence of Stravinsky at times, only transformed utterly into very original and Argentianian-rooted piano music that breathes with life and energy, dynamic drive and lyrical depth.

A brief "Prelude No. 5" by Federico Mompou ends the program. It is a kind of encore that has introspection and a pronounced Spanish flavor. It caps off the CD nicely.

In short, Francois-Xavier Poizat has chosen some very vibrant Ginastera and plays it all with a very proper mix of drive and subtlety. It is a rather fabulous program, with much that is unforgettable on very vital levels. Poizat clearly has a very pronounced affinity to Ginastera's moods. The performances are impressive and breathtakingly alive. Strongly recommended.