David Lang, Mac Wellman, The Difficulty of Crossing A Field 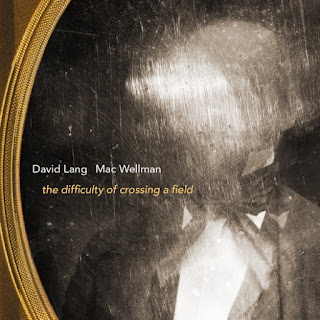 Some works are deep, complex, they defy simple explanation. They are more than what they do exactly. This is the case for the chamber theater-opera work The Difficulty of Crossing A Field (Cantaloupe 21107), with music by David Lang, libretto by Mac Wellman. It is scored for string quartet, a small chorus (in the Greek dramatic sense as well as the current musical sense) and vocal soloists, most of whom have both spoken and sung parts.

The original performance took place in 2002 with the Kronos Quartet as the instrumentalists. This recording replaces them with the Harlem Quartet, who sound quite good.

The libretto is both matter-of-fact and esoterically allegorical, surreal. It deals with a plantation in Selma, Alabama at a time presumably just before the Civil War. The plot involves the owner-slaver, a Mr. Williamson, his wife, daughter, neighbors, a judge and the 14 resident slaves.

One day Mr. Williamson disappears into thin air while walking across a field in plain site of a number of witnesses, including some of the slaves, the wife and daughter, etc. There is the plain, factual element of the disappearance, as in part reconstructed in the court hearing after the fact. But there is an ominous, symbolic, extra-reality/super-reality part of the work, a mood the music and libretto capture well. The daughter just before the incident recounts a vision she had about "right and wrong," about the "mystery of Selma, Alabama" and how Mr. Williamson needs to "talk to the horses."

The sub-human nature of slavery is brought out in part by the names each of the slaves has been given, about the "rules" on how to oversee slaves, and the slaves as outside of the workings of local society, underscored by a prohibition on slaves bearing witness in any court. There is much more to the plot than that, but you must listen to the work to get the full gist.

The disappearance of Mr. Williamson is an allegory to the end of slavery, abolition, the end of institutionalized agri-racism. And it is movingly done.

There are important spoken parts, sung parts and a key role played by the string quartet. What impresses for one thing is the dramatic and musical excellence of the player-singers. They convince in their pacing, their inflections, and in the total musicality that Lang gives to us and they execute with dramatic dedication.

There are minimalistic elements strongly present in the score, as one might expect of David Lang circa 2002, but the repetitions are put to use to establish mystery and ominousness more so than trance or mesmerization. And there are linear elements, too.

This is a haunting, moving work that stands out in the mind long after you have heard it. You should give it a close listen. The melding of libretto and music is total and powerful. And it captures a societal way of life, a system on the verge of collapse in ways that are both strong and poetic.

Email ThisBlogThis!Share to TwitterShare to FacebookShare to Pinterest
Labels: bang on a can composers, david lang the difficulty of crossing a field gapplegate classical-modern review, modern post-modern minimalist chamber opera-theater in this century