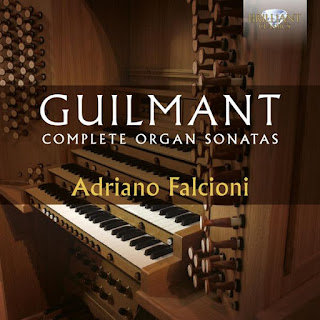 Felix Alexandre Guilmant (1837-1911) is a lesser-known composer of the French Organ School. Widor and Tournemire were his contemporaries. Like them he took his cue from Franck in developing a sprawling symphonic organ style in keeping with the modern developments in cathedral organ capabilities. His music reflects German late romanticism, harmonically Wagnerian and Franckian, technically influenced by Chopin and Liszt, and showing a sympathy towards Mendelssohn and Schumann. That according to the liners. I also hear a bit of Bruckner's gigantism and light-heavy motion, especially in the couple of scherzo movements.

He embarked upon a career as virtuoso organist, landing a position at La Trinity church in Paris and succeeding Widor as professor of organ at the Paris Conservatoire.

The 3-CD release Complete Organ Sonatas (Brilliant 94227) covers all eight of his works in that vein, played ably and idiomatically by Adriano Falcioni on an 1897 Carlo Vegezzi-Bossi at Sacro Cuore Church, Cuneo, Italy.

This is inspired music in the grand symphonic tradition. If it does not have quite the amount of dash of the Widor symphonies, nor as much mysterium as with Tournemire, the music nonetheless holds its own in very appealing ways.

Anyone who revels in the grandeur and sweep of the French School will find this a welcome addition to their collection. Those who are not as familiar might start with Franck, Widor and Tournemire.

The performances are first-rate, the sound quality excellent. The Brilliant price is right and there is much to enjoy here.