Lisa Bielawa, The Lay of the Love 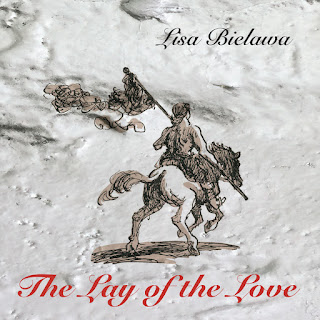 There are new composer-voices out there. Some reach my ears and move me. Others I may not be exposed to for whatever reason. It is a good time, though, to hear new music if you are in a position to do so. Lisa Bielawa is an excellent example of a worthwhile present-day composer whose music has now reached me and fortunately so. Her album of recent works, The Lay of the Love (Innova 915), has been spinning around on my CD player for about a week. It has gotten my attention and so today I say a few words about it.

In all, three works fill the album. A song cycle, "The Lay of the Love and Death," "Hurry," for soprano and chamber ensemble, and the small-scale chamber work "Wait."

Ms. Bielawa has for one thing a great talent in evidence on two of the three works presented: she is a natural in setting poetic texts to music. In that she reminds me of Benjamin Britten and Alban Berg, not in terms of the sound of the music, but in the organic inevitability of vocal line and the music built around it--and the expression of poetic mood in aural terms. That latter is true of all three works, since they are all text-based in one way or another.

You can hear this on the opening song cycle "The Lay of Love and Death," for baritone (Jesse Blumberg), piano and violin. It is based on an early epic poem by Rainer Maria Rilke, who composed the verses around the life story of a putative (apocryphal) ancestor of his who at age 19 fought and died in the war with the Hussars in the 17th Century. The thin book containing the poem was read widely by German soldiers on the front lines in WWI. Thousands of slain soldiers were found to have a copy of the booklet-poem in their pocket. Bielawa brings excerpts from the epic (translated to English) to poignant life, capturing the youthful ardor and pathos of the main character with a ponderous reflectiveness, an instrumental brilliance and vocal expressivity that has a timelessness built out of a combination of archaic and modern musical elements. It is music of originality, with vocal passages intertwining with instrumental interludes in enchanting, touchingly memorable ways.

"Wait" is one of four interrelated pieces that each dwell on specific excerpts from Nabokov's English translation of Pushkin's "Eugene Onegin." The violin part is a quiet drone that sets the table for the modern yet rather primal piano part. If this is postmodernism, and I suppose it can be called that, it is both more open in an early modernistic way and yet somehow redolent with an ancient quality.

Finally there is "Hurry," a chamber work for five instruments and soprano (Sadie Dawkins Rosales) realizing beautifully a poem by Boris Pasternak on the transformative magic of song. The music underscores Ms. Bielawa's lyric brilliance, the ease of interaction between poetic text, vocal line and instrumental part writing. Like her other works on the program, there is a striking confluence between classical-modernism--and its meaning-image as seen through a prism of both the present and the archaic past.

The performances are excellent, worthy of the musical singularity that is Lisa Bielawa the composer. The Lay of the Love stands on its own as some outstanding contemporary chamber music. It also whets the appetite for further exposure to her music. I find myself very much looking forward to hearing more. I suppose that is a sure sign that the music has reached me. It has! I do recommend you get a copy of this, especially those who respond to the vocal-chamber nexus in contemporary classical. Ravishing.