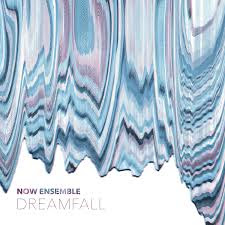 The contemporary chamber Now Ensemble shows us a novel way through the thicket with new music in a radical tonality, post-minimalist zone on their album Dreamfall (New Amsterdam 064). Their close-knit ensemble sound thrives through a careful selection of new repertoire that comes from the ensemble itself as well as stylistically compatible works from associates not directly associated, and from the dexterous affinity of each ensemble member with the whole.

The ensemble has a core group of instrumentalists: Sara Budde on clarinet, Logan Coale on contrabass, Mark Dancigers on electric guitar (who wrote the title track "Dreamfall I, II, III"), Michael Misrahi on piano and Alex Sopp on flute. There are several others who are a part of the group as composers only, Patrick Burke and Judd Greenstein, the latter of whom contributes for the album the work "City Boy."

There is some electronic manipulation to be heard here and there, to add to the ambiance of the music on occasion. And ultimately a kind of polar drift takes place on the album between ambient soundscapes and more dynamic linear forms. The combination of Dancigers's electric guitar with electronic enhancements and traditional classical chamber instruments gives the composers involved a kind of ultra-contemporary template for ambitious sound sculpting. The musical excellence of the ensemble and their strong affinity to the works leads to some marvelously spacious results.

In addition to the previously mentioned Greenstein and Dancigers works there are another five relatively short pieces by Scott Smallwood, John Supko, Nathan Williamson, Sarah Kirkland Snider and Andrea Mazzariello. Each has its own distinct identity; each operates and engages fully thanks to the ensemble's obvious relish of the music, their carefully established identity as players of post-, anything goes music within a relatively unified universe of new sounds.

The Now Ensemble and the compositions represented give us a kind of torqued oscillation between space and thrust, heft and feather-lightness, the subtle and the bold, the lyric and the powerful. It is new music with the experience of all that went before harnessed to what is "now" and, perhaps, what is still to come.

I found the entire program very uplifting, very capable of giving the listener sounds that have a vivid, ever increasing memorability after repeated close listens.

This is one not to miss!