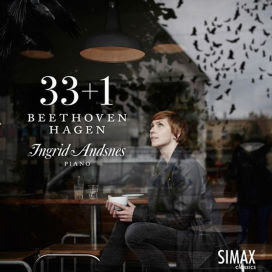 To begin the new year of posts we have pianist Ingrid Andsnes giving us a very spirited reading of Beethoven's "Thirty-Three Variations on a Waltz by Diabelli" plus the "Diabelli Candenza," recently written to precede the final movement of the variations by Lars Peter Hagen. The album is appropriately titled 33 + 1 (SIMAX Classics 1350). It was Beethoven's last work for the piano, written just after he finished the final "Piano Sonata No. 32" in 1822. It is a beautiful set of variations with all the brilliance and subtlety of his late period, as most will no doubt know.

The "Diabelli Cadenza" by Lars Petter Hagen calls for use of the e-bow on the piano strings, which creates a sustained, bowed effect with long tones that sound almost synthesized until you realize that these are the piano strings themselves. The cadenza concludes with some long chords. It is a subtle intrusion of the modern, a poignant break in the action that gives us pause, and really the opposite of a typical cadenza in that it withholds the virtuoso element altogether to give the listener an introspective inner moment before the final variation appears as if in a rematerialization of Beethoven and we are all-the-more mindful of the last minutes of brilliance. So the Cadenza sets us up with an unexpected five minutes before we reach our destination.

Is it absolutely a necessary part of everything? Certainly not. But then it does expand our listening consciousness and give us an interjection of a new tonal present.

If that was all there was to this album I'd probably not covered it. But it is an added plus to a masterful rendering of the Beethoven. Every variation is carefully sculpted and given a truly heroic-eroica reading. There is a warm, controlled passion without the sort of Liztian bombast or overuse of rubato that would make of the music more later romantic. Instead there is drama, dynamic excitement and attention to all the voicings.

Ingrid is Norwegian, the sister of pianist Leif Ove Andsnes. She most certainly makes a wonderful impression with the "Diabelli Variations." It is one of the very best performances to be had out there, articulate in every detail, very much true to our vision of late Beethoven as the brilliant yet controlled expressionist, as much a classicist in balance as a romantic in clearing a new path nearly single-handedly. And the Cadenza is a nice added touch that breaks up the music and makes you pause.