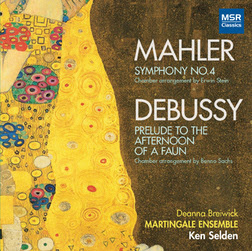 Mahler's 4th Symphony is not exactly like any other, though there are movements in his other early symphonies that have an Austrian and or Jewish folk flavor. Mahler wrote most of his music in his summer period, in between the demanding and often enough bitter climate of opera directorship. The idyllic environs that he and Alma occupied and the break from factional music strife seem no more telling that with his nostalgic, extraordinarily tuneful and bitter-sweet 4th. Like the other early symphonies, the music relates to the folk poetry of "Das Knaben Wunderhorn," which was also set to music by Mahler as a marvelous song cycle. The Martingale Ensemble under Ken Selden gives us a wondrous chamber version of the work, along with a similarly paired-down Debussy "Prelude to the Afternoon of a Faun," all in a fetching 2011 release (MSR 1373) that I am just catching up with--and very appreciatively so.

As the liners remind us, the 4th is built around a single "Wunderhorn" poem about a child's vision of heaven. Mahler makes of it a magic carpet, weaving folk-like themes and other very Mahleresque passages into a totality that may well make for his most accessible large-scale work, but for reasons that have more to do with its singing melodic strains than any attempt to pander to regular folks. The orchestration of strings, wind, brass and such shows Mahler's total mastery of the modern orchestra and must be heard in a carefully impassioned reading to be fully appreciated. So then why a chamber version? If you remind yourself that such a version does not replace the original, but brings you a new appreciation on more intimate terms, something that can stand proudly alongside the full orchestra version, you are prepared for the Erwin Stein arrangement heard here.

The Martingale Ensemble flowers luxuriously under Ken Selden for the Mahler, the arrangement of which apparently was a part of Arnold Schoenberg's Viennese Society for Private Musical Performance. Began in 1917, the Society was a subscription only gathering of music lovers (critics excluded!) to expose to them the best of modern music. The music of the late romantics was performed by scaled-down chamber ensembles so that the audience could better grasp the structural affiliations such music had with the later modernists.

And so this lovely arrangement. The final movement puts a fitting capstone on it all, with the soprano part (here performed very nicely by Deanna Breiwick) telling us that "no music on earth can compare to ours (in heaven)". Well, you believe it after hearing Mahler's extra-earthly sounds. The single Wunderhorn poem on which the symphony is based, "Das himmlische Leben (The Heavenly Life)" inspired Mahler to some of his earthiest yet also naively otherworldly music.

There may be no experience quite as telling as the full symphonic score played by a requisite number of musicians Mahler envisioned. But the chamber version, played marvelously well, has its own charms. Paired down to the bone, often without doubling of parts (statistically or otherwise) except understandably at times in the strings, you hear the music with a new clarity. It is an uncanny experience. This is "ethnic" music! Folk music! Yet it most certainly has that great developmental brilliance and grand sweep that Mahler is always all about too, and so it never really loses that connectedness of the full orchestra version.

The Debussy "Faun" does not quite provide you with the shock of recognition that Mahler's 4th does, but it is nicely revelatory nonetheless.

Ken Selden and the Martingale Ensemble outdo themselves with a very warm and vivid reading of the scores. It is a fabulous album! Those who know the originals like the back of their hands will be delighted and surprised with how well the music sounds, and how different, advanced, modern yet timeless those lines seem when expressed more as a series of nudes, as it were. Anyone who for whatever reason does not know the music will also respond to it I am sure. Beautiful!