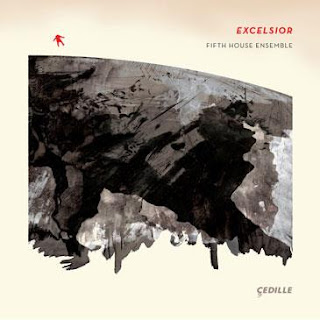 A world-class chamber ensemble dedicated to new music is undoubtedly key to the artistic life of a city and to the general dissemination of new works across the planet. The Chicago-centered Fifth House Ensemble is just such an outfit, and an exceptional one at that.

They show what they can do with four ultra-contemporary modern/postmodern works on the recent album Excelsior (Cedille 90000 148). All are tonal and exhibit marked tendencies toward the musical zone that occupies a position beyond minimalism or at a new phase of it, depending. All of the composers are younger than I am, so in my own relative sense I think of them as "young." The music in each case has something that sticks in the memory with originality. And Fifth House gives them each a beautiful reading.

Alex Shapiro's "Perpetual Spark" (2011) brings us some fascinating rapid ostinato figurations in the piano that are taken up by the winds and strings as through-composed counterlines are consequently taken up and developed by the rest of the chamber group. A rhapsodic but unusual waltz-like interlude intervenes in the middle section. The piece returns to the ostinato lines for a satisfying conclusion. Shapiro's work was originally written for solo piano. The chamber version for piano, string and flute/piccolo was prepared especially for Fifth House. It suits them well.

"Air" (2012) by Jesse Limbacher has rapidity, periodicity and repose as perhaps a mildly windy day might. Multi-velocity segments run up against each other as the wind players whisper, click the keys of their instruments and employ playing-singing modes to create a whirl of colors and textures.

The five part "Red River" (2007) by Mason Bates gives us a contrasting depictive series of tonal vignettes combining instruments and electronics. It follows the Red or Colorado River through its winding trajectory from its source in the Continental Divide, through to Las Vegas, the Grand Canyon, and the California Desert. The music in lively and affective ways captures the movements of the water past its multi-faceted landscapes, and its enchainment and perhaps overuse at the Hoover Dam and in California. The music enchants.

At 30 minutes, the title work "Excelsior" (2012) by Caleb Burhans is the most involved and most ambitious of the four pieces performed here. It uses multimedia and vivid musical pictorialism to dwell on the US Air Force's testing of high altitude parachute jumping in the 1960 project Excelsior, when Joseph Kittinger successfully dropped some 102,800 feet to land safely on the earth's surface. The music is radically minimalist and fluidly lyrical in the magic of its inexorable motion and the continual sounding of a complex modern chorale-like melody with ornamental and dramatic interjections, both mysteriously contemplative and affirmatively visceral. The music switches gears with a slightly more rapid figure first articulated by the violin and developed dreamily with counterlines in the ethereal vocal and finely crafted chamber parts.

The third section brings in the violin again to articulate a steady-state quasi-fiddle multiple stop figure that the ensemble builds around gracefully and contentfully. And onward it goes in its ever descending trajectory. Vocal and horn ride atop the ever eddying swirl with a sort of triumphant flourish. Burhans has that knack of using simple diatonic means to create inventive, non-banal results and enchanting panoramas.

As with the other works this is tonal music of the newest sort, informed by the best of the minimalist works but treating ostinatos as backdrops for varational counterlines and lyrical expressions that may also be long-form cyclical or not, but always with a linear unfolding in mind.

And so ends a most rewarding program of new and interesting works played with ultra-musical subtlety and rejuvenating clarity. This is I think rather essential listening for the newest in the new tonal music being spawned today. It rewards your concentration with sounds that refresh and renew the possibilities in a most artful way. Lend this album your ears, definitely.