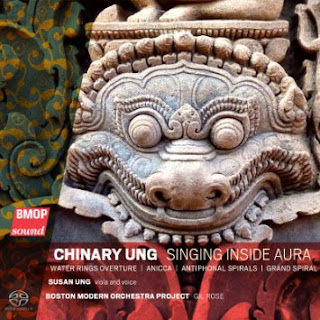 Cambodian-born composer Chinary Ung shows us in his latest collection of orchestral works, Singing Inside Aura (BMOP/sound 1044), that he is a major figure on the modern music scene. His childhood was spent absorbing the traditional music of his homeland, including the extensive vocalizations found in a small village setting of his original home. By the time he came to the United States to study under Chou Wen-chung, he had also thoroughly immersed himself in the study of western music.

The title composition "Singing Inside Aura" was composed in 2013. It features Susan Ung on viola and vocals, in a vocalization style Chinary Ung developed for her to in this case express the dual aspects of traditional Buddhism, the enlightenment that is heard and the enlightenment that is felt inside. It is a beautifully conceived and executed work that brilliantly combines the traditional and the modern orchestral in thoroughly integrated and personal ways.

It is one of five works presented by the acclaimed Boston Modern Orchestra Project under Gil Rose for this album. The works cover a vast space in time from Ung's 1970 "Anicca," the 1991 "Grand Spiral: Desert Flowers Bloom," the 1993 "Water Rings Overture," and finally the 1995 "Antiphonal Spirals." There are Cambodian scalular aspects that intertwine with modern classical expanded tonality in ways that work brilliantly well. Throughout Maestro Ung demonstrates vividly his strong sense of orchestral color.

The album in fact gives us a kind of mini-retrospective on the composer's development over time, with works that show on occasion traces of a Varese influence but most importantly a keen sense of how the dramatics of the spatial-tonal Cambodian sound worlds can fit together with a personal modernism in contemporary orchestral composing practice.

He manages via his gifted poetic talent to so thoroughly incorporate both strains into his own special musical inner sense as to be an absolute original. The meticulous sound staging of the Boston Modern Orchestra Project under Gil Rose's conductorship and Susan Ung's very effective dual soundings of voice and viola make of this album something very special. It is a remarkable introduction to the music of a contemporary master, a one-of-a-kind creative force at his very best.

Anyone with an interest in modern orchestral music will find this album endlessly intriguing, I would think, as I most certainly have. Get a copy of this without fail if you can.