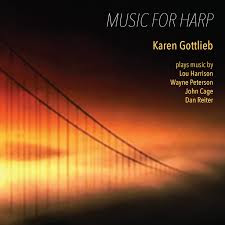 We owe the prominence of the harp in chamber music these days to various factors. The romantic era featured it often enough as an integral part of orchestral works and modern composers have turned to it more frequently for its special color and capabilities.

World-class virtuoso harpist Karen Gottlieb treats us to a program of modern-era music for harp and various chamber combinations. She has spent a good deal of time in the San Francisco Bay Area playing the local modern's music, and consequently she falls naturally into this recital of mid-to-late 20th century Frisco-associated composers. Her father was a prominent ethnomusicologist and her mother an architect. As she grew up there was a continual flow through her home of visiting artists and musicians--from Hindemith to Ravi Shankar. The adventurous music of modern and world scope was something she learned about and embraced early-on, apparently. The repertoire she so aptly addresses on Music for Harp (Innova 927) reflects her roots and makes the music she plays a part of her personal heritage. Hence there is a conviction to what she does, a depth.

There are to be heard five tonal-domain compositions by four modern composers associated with the Bay Area. The album is bookended by two Lou Harrison works, the most iconoclastic, world-oriented composer of his time and place. The first, the 1940 Suite for Cello and Harp finds us in a sound world not yet fully matured but nonetheless filled with the lyrical, folk-inflected genius in a five-part suite idiomatically suited for the two instruments. Dan Reiter aptly seconds Ms. Gottlieb on cello for a performance of sensitive warmth.

Harrison's later (1967-77) period masterpiece "Music for Harp and Percussion" gives us the fully bloomed composer in one of his most productive periods. The combination of Karen's harp and the twin percussion voices of William Winant and Daniel Kennedy triumph with a fully alive version of the seven-part suite. It shows off Ms. Gottlieb as an expressive and fully resonant proponent of harp finesse and dynamics. And the quasi-ethnic, quasi-archaic uniqueness of mature Harrison never sounded better.

Dan Reiter's Sonata for Flute and Harp (1982) has a kind of neo-impressionist lyricism that is brought out beautifully by Tod Brody and Ms. Gottlieb. And Wayne Peterson's "Colloquy for Flute and Harp" (1999) has that resonance as well, with a slightly more expanded melodic modernism. Both works are quite engaging.

Karen's harp version of John Cage's mysterious "In A Landscape" (1949) brings out its wonderful vibrancy at the hands of a master.

So all told we have a rather wonderful set of music on this album. Karen Gottlieb has a sure and deft sense of her instrument and brings out its many timbral and spatial wonders with these heartening set of works. Anyone who loves the harp and/or lyrical modernism will not fail to appreciate this one!

Very recommended for its angelic presence!