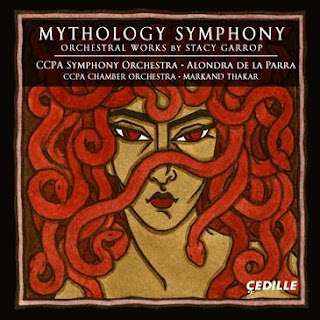 Chicago-based composer Stacy Garrop is in focus on today's program of her orchestral works written between 1999 and 2013, Mythology Symphony (Cedille 90000 160). The music is quite respectably performed by the CCPA Symphony Orchestra under Alondra de la Parra and Markand Thakar. We get the title work (2007-2013) in its world premiere recording, plus "Thunderwalker" (1999) and "Shadow" (2001).

The main event is the five-movement symphony, each movement themed upon a myth involving a woman or women. The music has an eclectic advanced tonal-modern quality, with dynamic orchestration and an expansive thematic flourish. It was written in stages over six years in response to a number of commissions, each producing one or more movements. They center around the story of Medusa, Penelope in waiting for her husband Odysseus, the Sirens, the Three Sisters of Fate, and Pandora. Each movement has loosely programmatic elements and moods that correspond to the narratives involved. And so we have a spectrum of orchestral events ranging from the gentle and serene to the dynamic and turbulent. We ultimately are treated to a work of contrasts, of depth and expressive girth.

"Thunderwalker" summons and depicts in three movements a sky-dwelling thunder god "whose footsteps fall loudly upon the clouds."

"Shadow" came out of Ms. Garrop's stay with the Yaddo artist colony located in Saratoga Springs, NY. The artists and photographers and the snapshots she herself took at the site become the impetus for the work, as bits of light and color transpose into counterpoint, changing texture and intersections of sound blocks.

The program shows us a composer of promise, filled with lucid musical ideas and a sure sense of the orchestral forces at hand. The music alternates between modern and tonally expressive, while remaining consistently eventful and scintillating. The "Mythology Symphony" is the most accomplished of the three. The other two works add to our appreciation of her development and are a good listen in themselves.