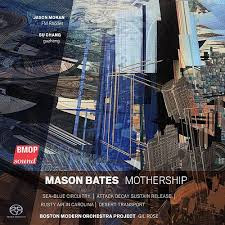 Youngish composer Mason Bates (b. 1977) has a directly visceral approach to composing for orchestra that makes his music in-demand on concert stages throughout the world. The Boston Modern Orchestral Project under Gil Rose has recorded an anthology of Bates' works on the recent album Mothership (BMOP/sound 1045).

There are five works in all, written between 2006 and 2013, and all have something worthwhile to offer. They have not been previously recorded. The works have enjoyed a good number of performances and/or are breakthrough pieces for Bates. Either way they make for lively listening.

The title work was written (2010) as an opening kind of blockbuster that has a vibrantly fanfarish flourish, an electronica element in the sophisticated beats employed and solo parts for jazz luminary Jason Moran on electric piano and guzheng virtuoso Su Chang. There is a deft handling of orchestral forces in a kind of Quasi-Americana manner, a lyrical brightness that owes something to the lineage of Aaron Copland (at least as struck my ears) but made personal and present-day.

We get an electronica beat aspect and some reworked field recordings of katydids and locusts on the descriptively evocative "Rusty Air in Carolina" (2006) where the bright lyricism is even more pronounced.

Those two especially stay in my memory but there are treasures too in the other works to be heard in the collection: "Sea-Blue Circuity" (2010), "Attack Decay Sustain Release" (2013), and "Desert Transport" (2010), the latter of which combines a wonderful pastoral grandeur and depictiveness with a bit of Pima Indian song.

You can see how contemporary audiences respond readily to his music. It is tonal and very well put-together, it adds some ultra-contemporary popular elements in the beats to be heard, but most importantly the music breathes with a rather extraordinary earthiness and elan.

It is music to be experienced TODAY. It pleasures without pandering. It is accessible but filled with plenty of musical content. It is wonderfully orchestrated and it speaks a universal modern mainstream language. Like Copland perhaps, he has his ear to the popular world and can allude to it without directly taking it on, mostly. The anthology gives us another excellent example of what is going on out there. You could play it for your kids and they might take to it right away. But then grandma might find it interesting, too.