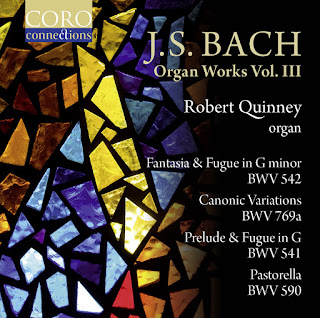 Not to be tasteless, but J. S. Bach and the expression "over my dead body" go well together, if not in the strict sense of the phrase. Bach is played and listened to in the age of mechanical reproduction, today, far more than he was in his lifetime. And of course that is not just because of modern media. His reputation has grown steadily from the time of his death until now, when we see him as a composer of incredible genius--not only the Baroque Era's leading light, but a composer for all times, all seasons.

We all know that, presumably. All who read here also no doubt know that some of his greatest works were for the solo organ, an instrument for which he was a renowned exponent even in his lifetime.

Robert Quinney, organist with the Sixteen, an early music group I have covered extensively on these pages, and also the Director of the choir of New College, Oxford, is a marvelous organist who happily for us all, is recording much of Bach's output. I have been listening to his Organ Works Vol. III (CORO Connections 16132).

Quinney gives us these works on the Metzler Organ at Trinity College, Cambridge, a superior instrument that sounds every bit as one might wish in the hands of Maestro Quinney. The sound is ravishing as is the recording quality.

Volume Three presents a beautiful mix of music associated with the Advent and Christmas seasons and some that are not. They flow together well no matter what time of year.

Some of these are masterpieces, none are in any sense minor, and Robert Quinney gives them all a crisply clear, detailed, spirited and supremely triumphant reading. I would say he is without doubt one of the great Bach organ exponents of our time, on the basis of this very worthy volume. The music speaks volumes to us in this modern era, if we only stop our infernal everyday fidgeting and listen.

And so I recommend this one to you very highly.