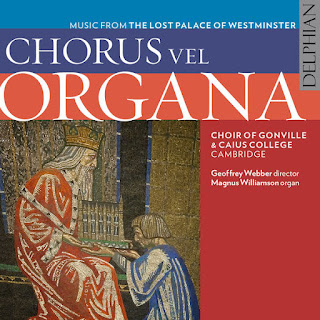 What became the Houses of Parliament in was originally the home of the collegiate chapel of St. Stephen. It was founded by Edward I and gained college status under Edward III in 1348. Its musical life flourished for 200 years until being abolished by Henry VIII. Chorus vel Organa, Music from the of (Delphian Records DCD 34158) looks at the music made in the last years of its existence during the reign of Henry VIII. The Choir of Gonville & Caius College Cambridge under Geoffrey Webber, Magnus Williamson on organ, gives us a fascinating selection of sacred vocal music from that era, in marvelously luminous performances.

From Anonymous to Nicholas Ludford to William Cornysh, some fine composers give us Masses and short movements for parts of the Mass, other choral and solo organ music. In the process the program paints a vivid picture of performance practice and the musical life there in the final period of official English Catholicism.

The performances lack nothing for period authenticity. The choirs shine beautifully and the organ is as was current in the period, with a wholly archaic and exceptional sound. The sound of chanting in chords is uncanny and eerie, but all of the music as performed thrives as enchanting relics of Renaissance England.

Early music enthusiasts no doubt will find this a rather glorious volume as I did. Those who have an interest in Anglo roots will respond readily too, of course. The performances seem definitive and the repertoire special and satisfying. Very beautiful!
Posted by Grego Applegate Edwards at 1:30 PM