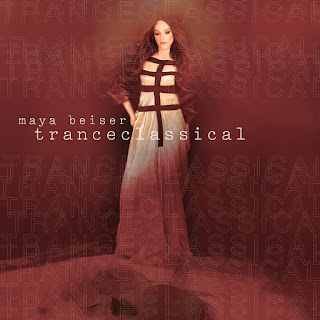 Like her last album, Uncovered (see August 22, 2014 posting), Maya Beiser and her cello embark on a journey that crosses genres convincingly and magically. That is on her latest, TranceClassical (Innova 952).

The studio is her canvas on this album. Overdubbing and effects give her cello a larger-than-life aura and the arrangements carry the day. On the "covers" she makes of the songs-compositions something new and often enough, unearthly. Bach's "Air" orchestrates all parts on cello; Imogen Heap's beautiful "Hide and Seek" features Maya's very nice voice harmolodized as on the original, and adds a cello sonance that sets it apart. Lou Reed's "Heroin" gets a radically different treatment as arranged by David Lange, and Hildegard von Bingen surprisingly enters the ambient arena, thanks to Maya's iconoclastic arrangement of "O Virtus Sapientiae"!

Then there are some postmodern gems by Michael Gordon, Glenn Kotche, Julia Wolfe, Mohammed Fairouz, and David T. Little.

Maya's music is about not giving a good d about what is expected of her, of what contemporary music cello albums are supposed to cover. It's about creating an atmosphere of instant karma, of enchanting spellweaving, of what a modern studio and a lively imagination can produce.

Is this the future of modern classical? No. The future is not going to be about any one thing. There will be music that forms its own niche, coexisting with other niches alongside one another. If the music business has shrunk over the last decade or so, it may be a sign of pop death by asphyxiation. The die seems cast. It is the "serious" music category that will still be heard, collected and appreciated by a dedicated minority of aficionados, perhaps long after the billion dollar pop industry becomes truly marginal?

So in that way Maya Beiser is part of the future. The music glows and portends much. Check this album out, by all means.
Posted by Grego Applegate Edwards at 5:10 AM