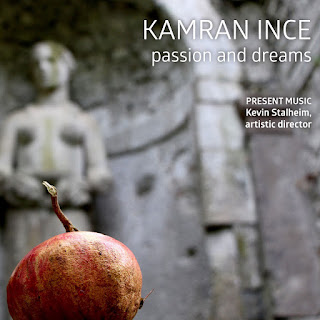 Turkish-American composer Kamran Ince has the knack of combining Classical Turkish, Byzantine, Ottoman, and Balkan influences with Western strains in his album of large and small chamber ensemble music Passion and Dreams (Innova 931).

The postmodern cyclical merges with horizontal minor and extra-tonal phrases for a unique amalgam of ever varying matrices of synthesis.

"Dreamlines" (2008) features 10 instrumentalists, six who also join in the singing of an overarching melody. It is a haunting piece.

"Asumani" (2012), a duo for ney and cello, has unmistakable Turkish roots in its prominent ney flute breathiness and minor mode. The cello part gives contemplative responses, ruminative soliloquies and drone textures. There is magic to be heard.

"Fortuna Sepio Nos" (2013), here in its clarinet, cello and piano version, has some post-Glassian elements of flourish-repetition without cloning in. Then it goes on to some walking atonality and then back to the repetition flourish for a minute before establishing a minute or so of ceremonial atonality and then a modern meets Ottoman moment. This is a rather wild ride through contrasting style amalgamates, the modern and the ancient, the minimal and the Turkish. It's a hat-hanging-onto rush of good ideas all sequentially stitched together in unexpected ways.

"Partita in E" (2007) for violin and percussion is notable for its Turkish duo underpinnings and its striking violin motifs. A Turkish Arvo Part? Not really but there are resonances. It's striking at any rate.

The Present Music organization under the artistic directorship of Kevin Stalheim do the compositions perfect justice.

Despite some eclectic moments the general thrust of Kamran Ince's music on this collection is singular. It angles and moves from style-station-to-style-station with an adroitness and creative thrust that makes this music stand out as a memorable synthetic adventure. Well worth hearing.
Posted by Grego Applegate Edwards at 6:11 AM