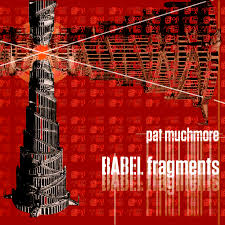 High modernism of course has moved on from its serial phase and has existed in a world beyond for some time now. In its various new forms it continues to burgeon. An example of where it may be found today can be profitably heard in composer Pat Muchmore's new recording BABEL fragments (Innova 947). On it we get to hear four varied and striking multi-movement works: f(f(4))[Kr]5s118d1:} {:Fr.I.a-k for string trio, f(f(1))BABEL (maya) for coloratura soprano, cello and electronics, Fr.II.a-k for unaccompanied scordatura cello, and f(f(3))SHESHACH(maya), a duet for mixed instrumentation and electronics. Muchmore plays the cello, trombone, turns in a brief vocal performance and realizes most of the electronic parts, joined by a distinguished cast who flourish in the rather rigorously demanding compositional matrices Pat fashions for each work. Mention must be made of soprano Kamala Sankaram, who handles the extraordinarily articulated vocal part in BABEL with enormous vitality and virtuosity.

This is a music of dramatic gesture, a world where tonal signposts are normally few or non-existent, where texture, color and abstract syntax hold forth in ways that put the Muchmore stamp of identity at the forefront.

There are no simple ways into or out of this music. SHESHACH utilizes free jazz improv language at times but otherwise this music exemplifies a modern day Babel of intersecting musical voices, a poetic energy and uncompromising demeanor.

There is much to immerse oneself in, as Muchmore throws down the modernistic gauntlet. It is up to the listener to parse out significance as he or she sees fit. That means that listening involves a bit of work. Understanding and appreciation grow out of deep concentrated listening, the continual interface between musical intent and listener openness.

It is not often as jarring as many high modern programs can be to the initiate, but it is far from light music nonetheless. The works and their dedicated performative excellence are indeed something very worth spending repeated time absorbing, for Muchmore is a figure of talent and originality. Enthusiastic modernists out there will find a great deal to like; those unfamiliar or reluctant to dive into the ultra-contemporary have to be willing to make a real effort. But in the end the Muchmore style will give you a great deal to contemplate and dwell within. An important recording for what is new in the new music world.


Posted by Grego Applegate Edwards at 6:06 AM