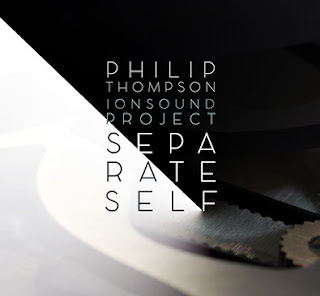 Pittsburgh-based composer Philip Thompson gives us a program of new tonal postmodern chamber music on Separate Self (Ravello 7936) with focused performances by instrumentalists of the IonSound Project.

This is music often of an introspective, almost neo-impressionist cast, most notably in his "Nocturnes" (2014) for violin, viola and cello, in four groupings of three miniature movements. It is music of a fragile, transparent sort of magic, occasionally reminding one of Steve Reich's later phase, only with repetition more dimensional, an ostinato for a separate melody line and/or sometimes thematic in its own right, or both alternatingly. The music celebrates Galileo's 450th birthday via a reaction to Michael Morrill's paintings that in turn react to Galileo's moon drawings.

"Kecow Hit Tamen" (2011) pays homage to the composer's Lumbee Indian roots with a quintet of flute, violin, cello, clarinet and piano and spoken word that plays upon an Algonquin phrase that means "What is your name?" or "What is this?" The musical canvas of ruminative tonal abstraction and recitation is meant to capture the feeling of learning a new language. A video animation by Ryan Day was created to accompany the musical performance.

The "Score to the Film Virgil Cantini: The Artist in Public" (2009) is scored for flute, cello and piano--and has a related reflective mood.

"Trouble" (2007), for flute, violin, clarinet, cello and piano is based on a Gradual for the Second Sunday of Lent. It is lyrical and delicate, unfolding leisurely while it virtually reflects back on itself. There is a good deal of beauty here. The chorale like concluding passage gives the work a satisfying sort of "Amen,"

Finally, "Separate Self" (2013) furnishes for us a more outgoingly vibrant music with Ryan Socrates playing nicely a part for drum set in the first movement that drives forward the music for flute, clarinet, violin, cello and piano. This is an interlocking, rhythmically vivid phraseology that has a nicely inventive melodic contour and pushes us forward with recognizably familiar pomo language which manages to be yet also strikingly original. The middle  movement slows things down and looks inward. The final movement brings back musical motion but with a different kind of linearity. "Separate Self" stays in the mind. It is quintessential Thompson.

All that is what the album is about. Philip Thompson manages to sound quite fresh and lyrical while making important contributions to the new tonal postmodern repertoire. Chamber music with a difference, accessible, well configured, Separate Self is a tonic for troubled times. Yet it does not pander to an "easy" ears sort of innocuousness. Recommended!


Posted by Grego Applegate Edwards at 6:34 AM