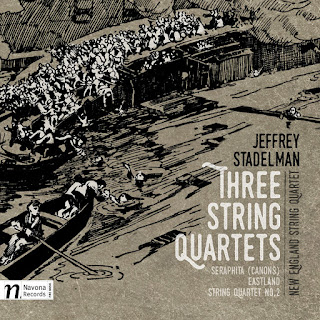 Being a composer is generally a lifetime occupation. Age factors into the situation in a positive way, since ideally artistic maturity is cumulative and ever-broadening. It is not an activity that depends upon physical conditioning, as in baseball where even the very best are generally forced to retire around age 40 or so.

Jeffrey Stadelman, chairman of the department of music at the University at Buffalo, State University of New York, a pupil of Stephen Dembski and Donald Martino, holder of a Ph.D. from Harvard, has been perfecting and evolving his music for more than 25 years now.

We've come across his music happily on these pages, notably on the album Messenger and Other Works (see June 27, 2013 posting). Today we further our exposure with a recording of his Three String Quartets (Navona 6048).

Stadelman's "Seraphita (Canons)," "Eastland," and the "String Quartet No. 2" get precision and passion from the New England String Quartet, who perform all the quartets in the volume.

All three works have a rigorous, terse quality, perhaps especially the nine "Seraphita (Canons)" that open the program. But even the longer, single movement "Eastland" says a very great deal in a relatively short period of time.

The music is deeply modernist in tenor, rather profoundly uncompromising, quartets with the concentrated punch that places them near Carter or Shostakovich at their best.

The three-movement "String Quartet No. 2" is somewhat less rhythmically abstract that the other two. An almost Viennese rhythmic feel hearkens back to, say, early Schoenberg quartets in essence, though Stadelman keeps to his own thematic use and development of expanded post-tonality.

These are marvelous examples of the high modernist art today, string quartets that deserve a wide hearing, presented in near definitive performances. It gives us some brilliant Stadelman and some of the finest quartets written in our times. Anyone with a love of the new music will profit greatly from this disk. Strongly recommended.