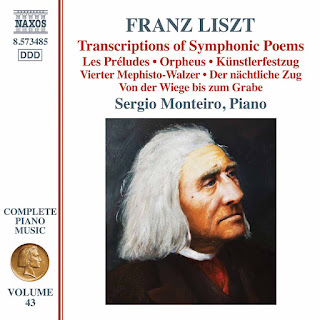 One could argue that Franz Liszt was the single pianist-composer most responsible for establishing a fully orchestral solo piano style. Sure, Beethoven was the pioneer. Schumann, Chopin and Mendelssohn were important catalytic artists. But in the end Liszt created the ultimate expressive language--a full-voiced, multiple-lined totality that approximated the symphony orchestra for its wealth of figures and complexities. His most notable original solo piano works were the most influential, but then there were transcriptions of Beethoven's symphonies and other orchestral works that gave further impetus to the virtuoso style he first fully cultivated in his peak middle period.

So it is only natural that there were also solo piano Transcriptions of Symphonic Poems (Naxos 8.573485) he himself wrote in his career. Naxos and pianist Sergio Monteiro give us six well and lesser known such transcriptions as Volume 43 of the ongoing Complete Piano Music Series.

"Les Preludes" and "Orpheus" are the most familiar of the poems and sound completely natural as solo piano arrangements. The initial transcriptions were done for these two by Karl Klauser and Friedrich Spiro, respectively, but then revised by Liszt himself, a process that leaves us with some convincing and exciting piano music. Sergio Monteiro gives us heroic performances for these and the other poems on the program. The music requires a great deal of virtuosity and of course a vivid sense of the music. Monteiro has it all. He understands the music and brings out the salient aspects very nicely.

There is much else of interest to explore. "Kunstlerfestzing" (second version, 1883) has much substance and charm. But really all of it makes for a Promethean program, including "Van der Wiege bis zum Grabe" (1882), "Der nachtlische Zug" (1872) and "Vierter Mephisto-Watzer" (1885).

Even the most devoted of Liszt admirers may not be familiar with all these transcriptions. Under the very capable hands of Monteiro it all comes alive for some lyrical and explosive piano fireworks that remind you just how paradigmatic Liszt was and is as the complete pianist.

It is hard to imagine Scriabin, Debussy, Alkan, Ravel, Sorabji, or even the Ives of the Concord Sonata without Liszt's example. But for all that this volume is also a joy to experience.

Bravo!
Posted by Grego Applegate Edwards at 5:53 AM