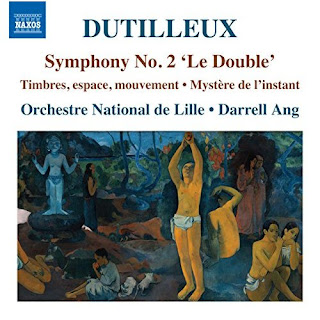 If I could come up with only one word for Henri Dutilleux (1916-2013) and his music, it might be lasting. Here in the present we experience the orchestral works as entirely modern, on the edge of such a world, speaking to us as a voice that is original, unexpectedly familiar yet strongly independant, by a consummate master of the orchestra with as much fertility of idea as brilliance of execution.

A good place to start, or to continue, depending who you are, is the recent Orchestra National de Lille/Darrell Ang recording of  Symphony No. 2 "Le Double" (Naxos 8.573596).

The Second, written 1955-59, is a prescient blend of thick yet relatively translucent impasto--multi-rhythmic voicings and jazz-like punctuations.

On the disk are two additional works. The "Timbres, espace, mouvement" from 1976-78 as revised in 1991 is a remarkably  mysterious evocation of Van Gogh's Starry Night, a bracing panorama of sound showing us the Dutilleux command and poetic disposition of parts. It does for sound what van Gogh did for paint, only perhaps feeling in its unfolding more like today than van Gogh's yesterday, timeless yet fixed in Dutilleux's own later-day idiom. The composer describes it as "a longing for an infinity of nature." It sounds like that.

The final work in the program consists of the ever unfolding series of ten episodic moments in time, the "Mystere de l'instant" of 1989. A "play of mirrors and contrasting colors" runs past our hearing beings in ways somehow both personal and modernistically universal.

The coupling of the three works with the readily rewarding interpretations of Darrell Ang and the Orchestre National de Lille decidedly makes this a most attractive offering. There may be other versions of the Second that might have a slight edge on this one, but the three-work package and the Naxos price bring this to us as a valuable and energizing choice. If you have the Second, there are the other two works as well and more the better for it. If you don't know any of these works and want to explore Dutilleux's brilliance with an optimum seating in the hall of your music system, here you go!
Posted by Grego Applegate Edwards at 6:16 AM