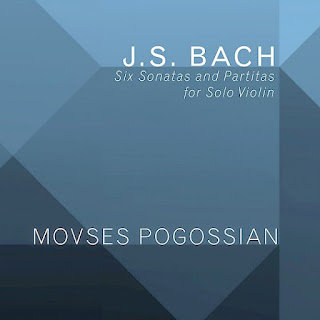 When it comes to Johann Sebastian Bach's works for solo violin and solo cello, it seems to me that their popularity and influence are at a peak. Or is it just that my appetite for hearing them has become more insatiable as I seem to continually hear them anew? But it is not just me. I have come across and mentioned on these pages a number of interesting compositions in the contemporary new music scene that make use of solo Bach in creating new confluences. And the number of new releases of recorded performances of the solo works seems higher than ever before...and more diverse in terms of the baroque to modern spectrum of possibilities.

I won't try to explain why this may be so. I cannot easily say, except to note the possibility that we are in a new baroque era ourselves, aesthetically speaking. A discussion on that would tip the balance of this review away from the music itself, so I must cut it short. Regardless, the solo works speak to us today as some of the most direct expressions of Bach's genius, surely. And string players have for a long time had the tackling of these works as a key part of their training, no? What counts in the end is their beauty, their facing of the musical cosmos with just four strings and a wealth of inventive brilliance.

Armenian violinist Movses Pogossian brings us a new version of Bach's Six Sonatas and Partitas for Solo Violin on 3-CDs (New Focus Recordings FCR 178) and I for one am glad he did. I've been immersed in the recording for a couple of weeks, sounding a constant as the parade of life passes by, anchoring me in the unassuming but vastly rich music that counters all that life might hold in store, or amplifies it, depending on how life is at the time. For me it is more a countering these days.

At any rate Pogossian does not bring us an ultra-baroque reading, with catgut strings, baroque bows and a litany of ornamentational end points. He choses the conventional modern violin and a straightforward but feelingful production of the six works. Nonetheless it sounds very true to Bach, so I guess one could say it is a middle-of-the-road version. Pogossian gets inside the music and gives us strong performances of the very sturdy sections, then slows down to savor the movingly preludian portions.

In the end Pogossian sings from his depths and thereby channels Bach in ways that bring us joy. I most certainly recommend this version if you don't have one yet. It is a benchmark for how we hear the music today. It also extends and compliments other versions, you who like me cannot seem to get enough.

Pogossian is a true artist. His Bach rings with its own creative truth. That is a great thing.
Posted by Grego Applegate Edwards at 11:59 AM