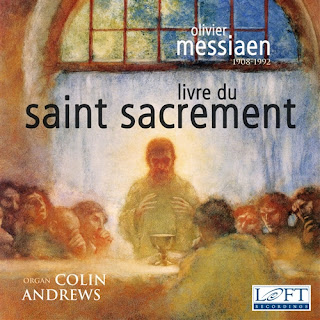 Olivier Messiaen (1908-1992), without question, was the most important and innovative composer for the organ in our times. He left us a body of work of incomparable modern power, mystery and depth. The gargantuan 1984 work Livre du Saint Sacrement (Loft Recordings LRCD-1152-53 2-CDs) is doubtless one of his most advanced, complex and spiritually probing works--and as I understand it, his last for the instrument. Colin Andrews plummets its depth and carefully renders its many moods and interworkings.

The full score is divided into 28 movements, carefully sequenced to give us the musical equivalents of the Catholic ritual of communion and theological-mystical-devotional-biblical dimensions of the experience.

The compositional elements, as the liners aptly inform us, were a synthesis of Messiaen's mature techniques and procedures: Greek and Hindu rhythmic forms, Messiaen's transliteration of sacred words into musical utterances, a very personal serialism, limited transposition as defining the harmonies, plainsong and birdsong (the latter of birds Jesus might have heard locally during his lifetime).

This is a huge undertaking that gives us a largely abstract, ultra-modern and extraordinarily meditative sequence that requires concentrated focus in the listening process. Here is a man whose religious convictions led to an extraordinarily singular universe of sounds, a musical language like no other, a lifetime's understanding of the full spectrum of the cathedral organ and its capabilities.

In the hands of Colin Andrews the work speaks with a cosmic flourish and deeply interior dialog that is movingly spectacular, experientially radical yet tied to a deep spiritual understanding. It is literally words or feelings put into music but not easily converted back into words. By 1984 Messiaen had become a transcendent being of musical sound.

This is Messiaen's message to us all, and some of the most difficult and involved, ecstatically rewarding organ works I have ever heard. Give this music your absorption and it will return the effort with a glimpse of the composer's intimations of eternity.

Highly recommended, but not to be taken lightly!
Posted by Grego Applegate Edwards at 5:21 AM