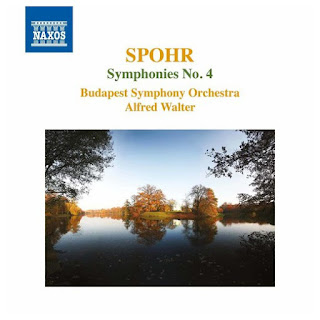 The complete Spohr (1784-1859) symphonies as recorded by the Budapest Symphony with Alfred Walter conducting turns out to be a fine thing, a revelation, the symphonic life's work of a composer that has seen neglect and in the very least is worth reviving. He reflects a world where Beethoven's star shines brightly and he does it his own way.

The volume at hand covers Symphony No. 4 (Naxos 8.555398) . Spohr completed the symphony in 1832, a time of political upheaval at the court in Kassel, Germany. A new prince had assumed rule, and the money available for music was in jeopardy. Spohr set out to write a work based on Carl Pfeiffer's poem The Consecration of Sound. He ultimately decided to make it a programmatic symphony that followed closely the text. So one passage represented, for example, a gentle breeze and bird song before a storm erupts.

One need not pay strict attention to the program to appreciate the music. It is ambitious Spohr and it sounds out with a satisfying trajectory, reaffirming that Spohr was one of the great symphonists of his era. Audiences in Germany and England reacted enthusiastically. Critics distrusted the programmatic idea and had their reservations. Hearing it now we find a good deal to like, or I do at least. After all, Beethoven's Pastoral Symphony stuck to a programmatic approach, too. And neither work suffers as a result!

Accompanying the symphony are two short Overtures, to Faust and Jessonda, respectively. They are welcome additions.

Now I must admit I did not have any idea what the complete Spohr symphonies would be like before I played the first volume I reviewed. A beautiful surprise was in store. Is he as good as, say, Mendelssohn? It is probably a meaningless question for he does not sound like Mendelssohn. He rings out with a personal take on the music in the air, then. What more can one expect? It is well enough. No. 4 is a gem. I am glad to have it. I suggest you spend some time with this CD.
Posted by Grego Applegate Edwards at 9:19 AM