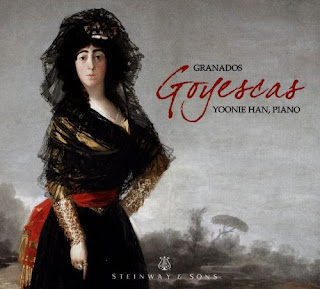 I have a bit of a soft spot for Granados (1867-1916)--and the recent Naxos series recording many of his orchestral works (that I covered here a while ago) has given me much to appreciate. But whether or not one is a Granados convert one will likely take readily to his most famous work, the Goyescas for solo piano, a six-part suite that has been recently newly recorded by pianist Yoonie Han (Steinway & Sons 30067).

The music is all about Francisco Goya, the famous Spanish painter, and his work. Each movement depicts a scene from an imagined love story of a Spanish Majo (bohemian, mostly lower-class Spaniards of Goyas' time) and his would-be Maja.

The music was introduced in its original piano setting in 1911. He later crafted an opera out of its motives, which debuted at the Met in 1916. Granados and his wife attended. Their ship on the return voyage was torpedoed (it was WWI), and Granados died as he attempted to rescue his drowning wife. (Thank you to the liners for that. I did not know.)

The piano version of the work has enjoyed the love of music listeners since its premiere. It is an extremely lyrical and magnetic work that shows Granados' folk-Spanish, quasi-impressionist, melodic-harmonic gift as well or better than anything else he wrote.

The South Korean native Yoonie Han gives us a glowing reading of the music on the recording at hand. She embodies the flowing melodic presence, the grace and stunning phrasings of each movement with all the poetic nuance the work demands.

I've heard some ravishing versions of the Goyescas, but I must say that Ms. Han rivals the very best.

The recording quality is superb. The music sings on. Yoonie Han triumphs. This version makes me very happy. Need I say more? There is no better introduction to Granados than this.


Posted by Grego Applegate Edwards at 5:29 AM