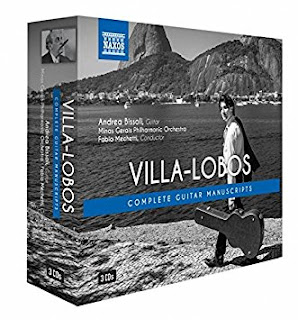 Throughout composer Heitor Villa-Lobos' career (1887-1959), the guitar was a central voice in his music, and he among many other things is considered a father figure in the development of modern, folk-laced music for the instrument.

Guitarist Andrea Bissoli is the central component in a three-volume set now available as an integral boxed edition. The Guitar Manuscripts: Masterpieces and Lost Works (Naxos 8.573117) is as the title suggests, a collection of his most illustrious works involving the guitar and also a worthwhile collection of works until recently lost to us or unheard, plus transcriptions of music not originally published in guitar versions, or guitar works transcribed for ensemble.

I have previously reviewed all three volumes separately on these pages. Type "Villa-Lobos" in the search box above to access those three volumes.

Suffice to say that this is a very rewarding anthology of works for those new to Villa-Lobos as well as the seasoned listener. Andrea Bissoli and his collaborators give us a stirring view of the considered yet spirited music of the master. These is enough here that is new or re-arranged to supply anyone interested and following the composer's output with a fresh take.

Highly recommended!
Posted by Grego Applegate Edwards at 5:07 AM