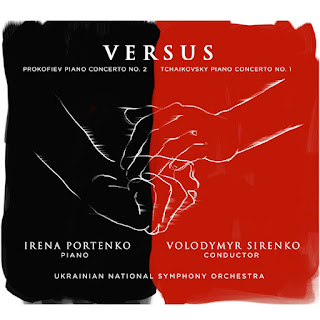 My old composition professor reacted to my expression of admiration for Prokofiev with the thought that he was compromisingly derivative of Stravinsky. We agreed to disagree. To this day I hear of course the influence, but the differences are like Beethoven to Schubert. Sure, there is a debt but there is growth and distance that marks each as a creative light as much tabula rasa as akin in a line of succession. And the music "in the air" of early 20th century Russia, or more precisely the zeitgeist of the turbulent unfolding of history of the times helps explain the expressionist affinities between the two composers as much or more than some putative sort of one-way transmission of inspiration. If you do not agree maybe you have not spent enough time with the Prokofiev opus. No matter.

Today's CD reminds us of that and of another debt Prokofiev held in the early Russian modernist flowering. It is a recording of the remarkable pianist Irena Portenko and the Ukrainian National Symphony Orchestra under Volodymyr Sirenko in Versus, Prokofiev Piano Concerto No. 2, Tchaikovsky Piano Concerto No. 1 (BGR 417). This underscores another debt and another tabula rasa response--here, between the clangorous paradigm of the Russian romantic piano concerto as created by Tchaikovsky versus a wholly modernist clangorous brilliance from Prokofiev. Each work is a masterpiece of its kind. 50 years separate the two. They could not be more different in their use of a melodic-harmonic idiom that defines their trajectory, and yet there is something very Russian about both in their pronounced lyrical effusion.

But for a moment we should think about the Stravinsky-Prokofiev nexus and differentiation. The year 1913 marks the debut of Stravinsky's game changing "Rite of Spring." It also is the very same year that Prokofiev completed the "Piano Concerto No. 2." A 1920 fire in Prokofiev's apartment destroyed the orchestra parts, but happily his mother had retained a copy of the piano score. Prokofiev set about reconstructing the piece in 1923, and that version is the one we still hear. It makes no difference in the end but the final version most definitely has the affinity of the dissonance and some of the savagery of "The Rite of Spring." Only of course it is a masterfully moving example of Prokofiev at his original best. Do we care in the end how the version we hear is in a parallel realm to the "Rites?" Sure, but we cannot find anything here that shows any kind of copying or mimicry. The work is pure Prokofiev, one of his early triumphs, a work that stands on its own as tragic, passionate, bittersweet, prototypically brilliant in the relation of the piano part to the orchestral response.

And I am happy to say that this version is graced by the absolute fire and tenderness of Irena Portenko's performance, something that makes the music breathe and live for us as well as it ever has. That too is the case with conductor Sirenko's ability to get all the expressive saudade out of the Ukrainian National Orchestra that we could wish for. It is a remarkable performance, probably the best I have heard!

The Tchaikovsky is extraordinarily well done, too. It is instructive to hear both concertos back-to-back in this program. I will leave it to you as to the insights one may glean from the comparison.

Suffice to say that Portenko is an interpretive giant, the orchestra tuned to each work with articulate, heightened enthusiasm, and in the end you (if you are like me) are very, very glad of it.

No self-respecting modernist should omit a close interaction with the Prokofiev. Of course the Tchaikovsky is essential fare for the Russophile. And the performances are marvelous!