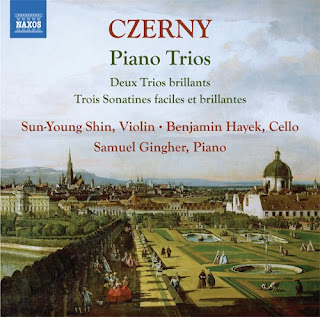 Anyone who took piano lessons long enough, at least from a classically oriented teacher no doubt faced one or more piano technique exercise books by Carl Czerny (1791-1857). I did. And at the time I did not know that he was an extremely accomplished and prolific composer in his day, more well-know for that than the pedagogy I guess then. Or he should have been if he wasn't!

I later chanced upon some of his piano music and was pleased with it. And so I have had a look out ever since for more of his music. Today I happily bring to you a fine recent example in a new release of a couple sets of his Piano Trios (Naxos 8.573848). They are played quite nicely by Sun-Young Shin (violin), Benjamin Hayek (cello) and Samuel Gingher (piano).

This is music that sparkles with some brilliance, a step beyond Mozart for emotive expanse and virtuoso bubble, parallel to Beethoven in terms of  furtherance but rather nicely original with its very own bravura melodics and rhythmic drive.

Carl early on studied piano with his father, who had him concentrate on Bach, Handel, Mozart and
Clementi. He got off to a great start and then became a star pupil of Beethoven, who gave him a thorough grounding via the piano music of CPE Bach. And so he was off to a real career though his family was poor and it was up to him to make good. He of course did.

The combination of a near-ideal reading of these works and the sweetly lyrical content make this an outstanding introduction to Czerny if you are not familiar, or if you are this remains a very nice one to add to your appreciation. These are World Premiere recordings too, so it is new in all senses for us. We get the  Op. 211 "Deux Trios brilliants" and the Op. 104 "Trois Sonatines faciles et brillantes". In all there are two works here in three movements, and three works in two movements.

At the Naxos price you really cannot go wrong if you want something finely wrought, and beautifully expressed by this fine trio. Highly recommended.

Posted by Grego Applegate Edwards at 9:00 AM