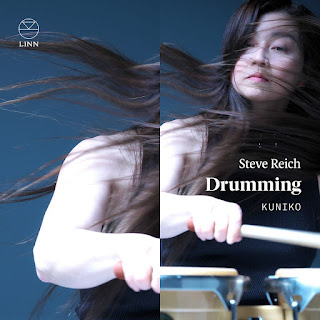 After Terry Riley's pioneering "In C," the stage was set for a long ensemble work that mapped out in greater depth a way to further extend such promising Minimalist trance ideas. Steve Reich had been a key early player in the development of the music with the phasing process idea as found in the electro-acoustic "Come Out," "Aint Gonna Rain" and then "Violin Phase."  In the early days of the 1970's he gave we who were following such developments a decided and beautiful way to proceed with the glorious work Drumming.

When the original commercial recording came out in 1974 I was fully ready for it and so it turns out were many of my peers. It happened to fall on the heels of a major uptick in my experience of World Music via a happy rising of several labels dedicated to such things. Of course there was a remarkable catalog available on Asch's Folkways, but then Ocora, Nonesuch Explorer and a couple of other labels began releasing well-recorded LPs of traditional African and Asian musics. I was at a first peak of immersion in all of that so Drumming hit something of a nerve with me, especially in how it managed to give original treatment to the idea of a pulsating percussion ensemble with multiple interlocking parts. Perhaps rightly so much has been made of how Reich took his phase and process idea and created a wonderfully alive music out of his kernel of structural insight. And indeed it is so. But inevitably perhaps the method of proceeding had become a kind of Wittgenstein's Ladder, or in other words it brought Reich to the new horizon of the interlocking repetition possibilities and gave him ways to ensure development. But then like the ladder that gets you to a point, there was perhaps no need to let a procedure dictate fully where one went from that place on. Or in other words the ladder was not necessarily needed any more? And it is true that subsequent works became less and less phase oriented. No matter. For in the end Drumming stood or fell on the quality of its invention, which one can hear always if one listens faithfully.

Some 48  years later, give-or-take, I certainly can say that my regard for this work has if anything increased in time. And it has done so because of a key factor perhaps--the sheer brilliance of the way Reich fashioned a diatonic pulsation of interlocking ensemble parts and in the way of so doing created, brilliantly invented music that sounds so well together that you can immerse listening self into it virtually forever! In the right hands there is an ecstasy of melodic-rhythmic suchness that you may not find quite to this extent elsewhere.

Enter master percussionist Kuniko and her new recording of Drumming (Linn CKD-582). I have heard virtually all of the versions that have come out since the first recording and they are all good. But this one is by far the best, the most inspired, the most moving I have heard. Why is that? Part of it has to do with how a master percussionist is a master. It is not of course just a matter of faithfully executing the notes. It is that something extra, that getting inside the notes and sending them volleying outward into our aural perceptual worlds that is most telling.

All of this music exists within a continually pulsating time frame.  From the most simple to the very most complicated interlocking parts, a key to a successful performance is the way the ensemble can and does sound the measured, leveraged and even periodicity. Ms. Kuniko does all of that (and plays all the percussion parts via overdubbing I believe) in ways that lift the pulse into a centered measured place that, in the vocabulary of jazz, makes the time "swing" mightily.  It is the transcendence of isolated repetitions in favor of a forward moving, irresistible whole that constitutes the beautiful excellence of this version over others. By getting each part measured right but then elastically so, it puts the foundations in place for a very beautiful version. For with those foundations in place it makes possible an extraordinary vital sounding of the melodic brilliance and timbral vivacity of the work. So even the first simple tuned bongo sections take on an intensity of intent. And then the crosstalk polyvalence polyrhythms (in rabbit-duck gestalt oscillations) are extraordinarily there in balanced and palpable ways that open up the entire listening universe of part-versus-part.  It allows for the rabbit-duck fluidity of what you can hear and so then you can have variable focus at any point in your listening. Each part defines the whole and each sounds wonderfully well if you only listen to that. But of course your musical imagination bounces around continuously in the hearing and re-hearing of an ideal performance of the work such as we get here. The bongos, the marimbas, the glockenspiels, the female voices, the whistling and the piccolo parts sound together with a maximum groove and depth of field that has to do with the swing execution and so the work seems continually to rock back and forth between two end-phrase points (in two units of six) in a remarkably fluid and ecstatic way.

I will not try and describe the entire outlay of the work as it is performed so wonderfully well here. That is something you need to get by sitting there and letting the music play YOU. And so I recommend you get this recording and surrender to it! It is as fabulous a musical experience as you might care to have if you are willing to let the music spin you like a ballerina armature! Kuniko brings home forceably the extraordinary brilliance of this music and helps ensure its place as one of the masterpieces of New Music in our lifetimes. Kuniko is a revelation! Very highly recommended. A midwestern US resident in the mid-1800s when introduced to Beethoven's symphonic music for the first time was said to have exclaimed, "well ain't that something!" I would suggest that this, too, is something!
Posted by Grego Applegate Edwards at 7:18 AM