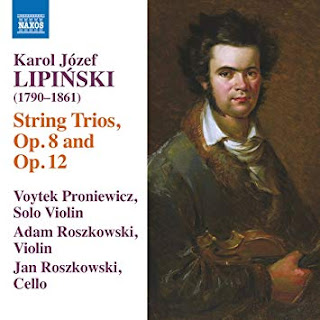 Sometimes it can be daunting to try and keep track of the unfamiliar composers now emerging on recordings these days.  It is a challenge to try and absorb everything. Yet too as a reviewer I am happily situated to be able to be exposed to a lot of music I could never have afforded to or even have been alerted to hear in the past. And then the things that are interesting and good I pass along to you readers and thereby I hope give you a chance to consider a lot more than you might otherwise have on your own.

So on this Monday morning I present for your consideration (as Rod Serling used to put it on the Twilight Zone) one Karol Jozef Lipinski (1790-1861), composer of among other things String Trios, Op. 8 and Op. 12 (Naxos 8.573776), which can now be heard to good advantage in the recent release by that same name.

One might ever return to a key question when first listening to an unfamiliar historical composer. That is, why is it we have heard nothing of this music until now? The most obvious answer could be, alas, because he was not good enough! Happily that is certainly not the case with Lipinski as I listen to this. So what then? Partly perhaps he was a violin prodigy that came out of Poland at a time when Paganini overshadowed all for virtuoso fame and the popularity of his compositions. It is true too that Polish composers were not as readily exported until Chopin took on the world with his huge talent.

That of course is a very simplistic and shorthand answer. Listening to the two String Trios presented so well here I can say that there is no reason we should not appreciate Lipinski now, at least via these very attractive works. As the liners tell us the trios were intended as noted by one Powrozniak as "lyrical Slavic folk tunes with elements of the ballad." And so you listen and very much hear a brilliance of folkish invention but then a very skillful and imaginative mapping out of the thematic material in a more-or-less Classical manner, but perhaps not so strictly in line with conventional sonata form as others might have espoused it then and later.

The music has a virtuostic strain to it as well and that sets it off in some ways from what might have been typical of intimate string chamber music then. So you might hear some echoes of Tartini and Viotti (and of the then-contemporary inspiration of Paganini), especially in runs and double stops in the lead violin, but with a bit more decidedly Haydnesque symmetry of developed form than you might expect from those models perhaps. So the trio reflects the virtuosity of the composer with a solo violin part (here played nicely by Voytek Proniewicz), plus a second violin (Adam Roszkowski ) and cello (Jan Roszkowski).

After a few listens the initial impression of agreeable music gives way to a more detailed appreciation (for me anyway) with the freshness of the folk themes and the impressive way Lipinski introduces and develops them. These seem to be folkish in flavor more so than directly quoted by the way. They sound as if they might well have been invented or heavily edited by the composer to me. That is not a deficit. It may actually be a strength because it all hangs together in an original way.

So why then would you be interested in this release? Anyone who seeks "ethnic-folk" rooted Classical-Early Romantic chamber music will find this a boon. But even if that is not what you think you look for, this is music that stands on its own, not so much as competing voices against Haydn or Mozart, but another strain altogether in some ways. And if you favor Polish and/or Eastern European sounds and composers, here is a great find. And lastly it is very worthy music, played very well indeed. If that seems interesting to you, by all means get this. The Naxos price is right! Lipinski is no slouch. Far from it.
Posted by Grego Applegate Edwards at 7:53 AM