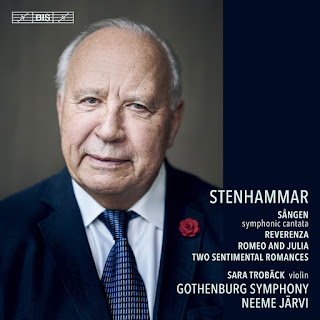 Years of life can pass for me without thinking about or listening to Wilhelm Stenhammar (1871-1927). And in fact I came to his music fairly late, during my golden age of combing through the stacks of Academy Records and Books in the city (New York) back when I worked nearby at Scientific American Books/W.H. Freeman. But when something new comes along I am ever interested. The new one at hand today renews my appreciation with some very strong music, strongly performed.

Happily we get that on a new release with Neeme Jarvi conducting the Gothenburg Symphony. It is a grouping of Stenhammar works that add to what we may have experienced and the performances convince us that we are in the presence of superior inventive powers and a vivid orchestrational imagination. All this on a program that includes the symphonic cantata Sangen (BIS 2359).

The liners to the album remind us that his breakthrough in the Stockholm music world came with his first Piano Concerto in 1894. He headed up the very same Gothenberg Symphony Orchestra that we hear on this recording  from 1907 to 1922. Under his guidance the orchestra blossomed into a world-class outfit. And when you hear the works on this program, all written during the tenure of his directorship between 1910 and 1922, you feel you are in the hands of a composer that understood from extensive experience the resources of the modern orchestra and put a wide spectrum of sonic options to excellent use.

This is almost an Impressionistic sort of Late Romanticism we hear on this CD, with the lyricism of a Grieg and the power of a Sibelius to summon the sounds into a local set of possibilities. Yet he goes his own way for all that.

The Hilding Rosenberg arranged "Suite from Romeo Och Julia" of 1922 opens the set. It is tender, lyrical and rather effervescent in its five movement presentation. The themes grow inside you as you hear the music repeatedly. And the acoustical outlay of the SACD sound we already detect happily, for this is a recording that sounds especially well.

"Reverenza" (1911-13) follows, which was the original second movement to his "Serenade." It holds its own and features some evocatively stunning string parts and sectional brilliances handled well by all concerned. "Two Sentimental Romances" of 1910 fall close on the heels of the short  "Reverenza" movement and bring out the solo violin rhapsodistic niceties of Sara Troback. The soaring melodic themes are memorable and distinctive. Stenhammar surely was no hack. Far from it.

"Sangen (The Song)," a symphonic cantata of 1921 is the main event in the program, running some 30 minutes with soloists, chorus and full orchestra. This work has more of the rousing ambition of a Nordic Late Romantic huzzah in contrast to its more Impressionist program items. There is a meticulously crafted whole to be savored in listening to this, the final work in the sequence. It is stirring music, and the ghost of Mahler sometimes seems to be lurking quietly and unobtrusively at the back of the stage.

Anyone who already knows and appreciates Stenhammar will take to this one. Those who want to hear another fine voice from the Scandinavian early 20th century flowering will be serviced well by Stenhammar's example and the fine performances to be heard on this program. And in the end it is simply good music, well performed. It is not exactly rabidly Modern, but not everything must be that to deserved our attention, right? Stenhammar is a very musical voice that deserves to remain a part of our sounding into musical air.  We should still hear and appreciate him now and in the future. Recommended.

Posted by Grego Applegate Edwards at 7:59 AM