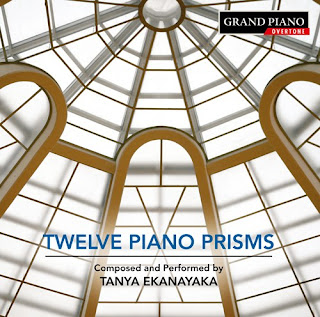 What is written in our philosophies, to paraphrase Hamlet, does not always cover everything. When I audition the late Modern strains of New Music for piano, for example, these days one cannot expect every composer to adapt the same set of parameters. It might have always been like that, but nowadays it seems truly anything is possible. So I was not sure what I was going to be hearing when I received Tanya Ekanayaka's Twelve Piano Prisms (Grand Piano GP785). Ms Ekanayaka plays the compositions for us and she is a fine pianist.

This is very lyrical piano music in a kind of Neo-Romantic, sometimes a bit Neo-Impressionist mode. I hear Tchaikovsky, Liapinov, Schumann, Rachmaninov, and a wisp of Chopin maybe as the forebears of Ms. Ekanayaka clearly outlined and feelingful pianism. The back cover tells me that many of the themes are Sri Lankan, and at times I can hear that now that I know to listen for it. And the blurb says there are traces of other world musics; the classical tradition and popular music have some sway here as well, so they say. The rhapsodic treatment is crisp and not extraordinarily ornate, which gives a refreshment to it all. Each of the 12 Prisms is in a different key.

Oh, the liners say she is British-Sri Lankan. So that makes sense.She was precociously talented and began studying the piano with her mother, then others. By the time she was twelve she had made her recital debut, her first concerto in public was at age sixteen. She has her doctorate in Linguistic-Musicology from the University of Edinburgh, where she has been a part-time faculty member since 2007.

I very much am taken with what she does with the "Auld Lang Syne" theme on the fourth Prism, which is  entitled "D Flat--Intuition, Auld Lang Syne & an Asian Secret" (2017). Each of the Twelve Piano Prisms  has a distinctive character and mood. And after a few listens you begin to hear the Sri Lankan heritage as a sometimes scalular idiom that is extended and lyricized by Ms. Ekanayaka's special musical gifts. And listening in time her inspired originality comes more to the forefront as her treatment of themes becomes more clearly etched into the listening mind.

I come away from the initial listens to Twelve Piano Prisms quite impressed and moved by the music. I am sure I will happily return to this music often. And I will look forward to hearing more of her music. If you want something tonally wistful and lyrically inspired in new piano music, you will most certainly find it here. If Ms. Ekanayaka does not easily fit in to what other music is being done today, so much the better for us. For we hear an original musical mind at work. Definitely recommended.
Posted by Grego Applegate Edwards at 9:28 AM